April 20, 2010
Stories and News No. 154
In Iceland there is a volcano called Eyjafjöll, word that means Mountain of the islands. It lies within the glacier Eyjafjallajökull, whose name is often attributed to the volcano. On 20 March the fourth eruption in its history occurred and it’s still active, causing the spread in the air of a giant cloud made of ash that are causing great disorder in flights traffic and airports across Europe.
The same happens in Italy too.
Every country is trying to better manage the event and each government, according to its own style and way of dealing with relevant issues, differently react.
Someone told me that Prime Minister Berlusconi said: "This volcanic cloud that prevents business men from flying was created by the reactionary and lazy communist Left."
The important thing is not whether he seriously did it or not, because since he is on the road he said even worse things.
What matters are the reactions to his words…
The Story:
Gianfranco Fini, President of the Italian Chamber od Deputies and PdL co-leader, also  more or less unintentional leader of the opposition: "I don’t share this disrespectful of volcanic clouds language, but I have an institutional role, so I can’t be part of these dialectical fights…"
Pierluigi Bersani, Chairman of the Italian Democratic Party, only man alive who was able to get fewer votes than Dario Franceschini, so soon after his bad leadership: "The premier made defamatory accusations. We have nothing to do with the volcanic cloud, because the Democratic Party could never create so much anxiety among the population…"
Umberto Bossi, Northern League leader, rediscovered friend of the Prime Minister: "Berlusconi is wrong. The cloud is made by the Kebab smoke of Islamic terrorists who want to invade our green plains…"
Antonio Di Pietro, the Right-wing politician elected by the Centre people fled from the Left: "The Italian Premier would better do to stand on his trials instead of hiding inside a cloud…"
Pier Ferdinando Casini, the Christian all seasons ally: "If what Silvio told is true, we dissociate ourselves from the Democratic Party and justicialist Di Pietro…"
Cardinal Tarcisio Bertone, Vatican State secretary, but also the man that when the teacher explained what to count to ten before speaking means had gone to the bathroom (I don’t say here to do what…): "The cloud is God's punishment on the heads of homosexuals that led paedophilia to our white church…"
Augusto Minzolini, the personified proof that in Italy anyone can become a national TV News director: "Tonight at Tg1 will have one of our volcanoes expert demonstrating the Bolshevik origins of the Icelandic ashes…"
Ignazio La Russa, Italian Minister of Defence, personified proof that in Italy really anyone can become a minister: "Italy will do its part as usual and will send army troops in Iceland. Obviously it is necessary to allocate more billions…"
And finally him, the Volcano: "What’s your problem? Can I quietly smoke a reefer?!"
And again with other wise comments… 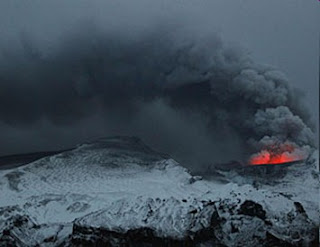