We are Giovanni Falcone tree

April 26, 2010
Stories and News No. 158
Saturday afternoon, in total daylight, under the eyes of all, it was made another insult to the memory of Italy.
Someone stole the pictures and messages left on a tree in memory of Giovanni Falcone.
The tree, also dedicated to him, is in Palermo in Via Notarbartolo 23, since eighteen years.
It's a fundamental symbol for our country.
I think that what happened is a fact of unprecedented severity and I feel obliged to write it here, now, just only to remind myself.
Because memory is the most important thing we have...
The Story:
We are the tree of Giovanni Falcone.
We are there, silent witnesses, stooped and motionless to look at life flowing around us.
We are the lady at the window waiting for something she could tell.
We are the man in the car behind the window blocked by the traffic light, fixing his glaring eyes to the reflection in the mirror of the man behind him, congested too by traffic lights also prisoner of a car behind a window, watching the reflection of everyone else.
We are the little old lady in line, patiently waiting with a look flying from her precious ticket and the people who divide her by the goal.
We are Falcone tree.
We are the ones who see, listen, and know.
We are the face in the crowd who regularly stops to admire the death of others, rejoicing in secret not to be the protagonist of the scene.
We are the tourists, the passing presence, and the person on holiday with the inalienable right to distract from himself, let alone others.
We are the nation of the spectators, with an eye to the TV screen and one to the next button on the remote.
We are the memory tree.
We are the citizen that every day does everything to convince him that the bad things happening in Italy always concern the persons in charge.
We are the men who have never entered the building where the persons in charge live.
We are only those that send them there.
But we are also the better part of ourselves when we find the courage to speak, to assassinate our guilty silence and pay tribute to a true hero…
We are the tree which had been stolen of the words of remembrances.
We are that bare, wounded, raped, humiliated, and speechless tree.
There is something worse than erase the memory of a country: to remove the words to remember it… 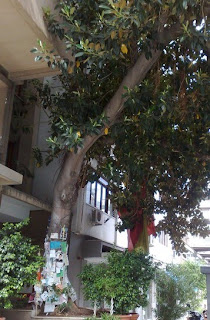 The News: Affront to the memory of Falcone.
Stories and news: “invented” Stories, fruit of my imagination, inspired by “true” media News.