May 19, 2010
Stories and News No. 175
Life is not fair and who has lived enough perfectly knows.
However, sometimes I see something unusual, even in our country.
It so happens that the perpetrators of the violence suffered by many young people on the Diaz school, in July 2001 during the G8 summit in Genoa, have some names.
Not all, some, but in these days is a lot.
Francesco Gratteri was sentenced to four years.
Vincenzo Canterini to five.
Giovanni Luperi to four years.
Spartaco Mortola to three years and eight months.
Gilberto Caldarozzi three years and eight months.
Are they actually guilty?
Are they the only people that have to pay or maybe there is still someone else?
I don’t know, I don’t certainly have any right to judge.
Nevertheless I want to stay on the positive and I advice Berlusconi government to do the same.
It’s true that this ruling opens once again a dark spot at the very least discussed management of the 2001 summit, but these sentences free prominent job positions that this time must be covered better considering the candidate...
The Story:
Ladies and gentlemen, here is the latest offers by our Ad Interim job Agency (Minister).
The first job that we propose was released by Francesco Gratteri: Against crime central director of the State Police. This is a role that requires a leader person and possibly with a spotless criminal record.
The second job, vacated by Vincenzo Canterini, is also crucial: Police Quaestor (Questore). The Quaestor is the provincial public security authority, a director of the State Police and a member of the provincial committee for order and public safety.
Obviously, the figure we are looking for must demonstrate a high sense of legality and honesty.
The third offer, to cover the void left by Giovanni Luperi, concerns an important rule: Head of Homeland Security and Information Agency, basic Italian secret service. The organization’s motto is knowledge of the facts is the salvation of the State. For this reason we need an extremely reliable candidate with mirrored virtues, because the security of the entire country depends on his work.
The fourth contract, no longer employed by Spartaco Mortola, is Vice Quaestor.
Of course, this is not the chief, only vice. But we're always talking about a job that requires a great morality; In other words, a good person.
The fifth and final job, up to now occupied by Gilberto Caldarozzi, is of great prestige: Director of State police’s Operational Central Service.
We seek someone who is fully aware of the responsibility to wear a uniform to serve the State and, above all, never forgetting that the State is the people.
Besides, the motto of the Italian Police is sub lege libertas, which means freedom within the law and not freedom under the law... 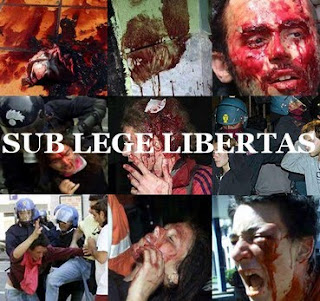 The News: Police chiefs convicted on appeal for violence at the G8 2001.
Stories and news: “invented” Stories, fruit of my imagination, inspired by “true” media News.
Our son was born, Saturday June 5 2010, storytelling in Rome.
Share the post: