Berlusconi and Scajola other history of sex

May 05, 2010
Stories and News No. 165
Italian Minister Claudio Scajola resigned.
Sometimes it happens.
Often it would be the correct thing to do when you are in such embarrassing situations.
The same doesn’t happen frequently, but this time yes.
Someone hints that what drove Scajola - the only man in the world that has a house paid by people he doesn’t know - to abandon the ministry was the coolness with which Berlusconi met him on Thursday.
As in occasion of the quarrel with Gianfranco Fini and the nuclear relationship with Putin, also today I have the great pleasure to host the famous American psychologist and sexologist Lisa Pointgee.
The Story:
A: Dear Lisa, what a pleasure to meet you here again.
L: Lisa?!
A: Excuse me... Dr. Pointgee!
L: Well, that's better. However, the pleasure is mine.
A: Listen, let's get straight to the point: Do not tell me that on the Scajola issue you see a sexual dynamic…
L: It's obvious.
A: Sorry, but you see Eros everywhere…
L: But Eros is everywhere.
A: In the case of Scajola?
L: As you know, I always carefully follow the news I receive from your country, where, as you recall, my family came from. I read somewhere that, unlike others caught them too, as we sexologists say, with the cucumber in the ass…
A: Well, we use to say the mouse in his mouth or hands in the cookie jar…
L: Anyway, unlike them, Mr. Scajola has not received the same endless solidarity by the Italian premier and this forced him to resign.
A: Maybe, but what does Eros enter in all this?
L: Oh, it’s clear that between Berlusconi and Scajola there is a fracture of erotic nature.
A: Really? Enlighten me…
L: You see, what happened in those days between the two made me think of certain behaviors of Canadian deer.
A: I’m curious…
L: In Canada the deer males live separated, with rare exceptions by deer females really willing to do anything to be part of the so-called virile herd. The head of the latter is a true despot, an absolute monarch and has promiscuous sexual relations with everybody else, male or female, even more at a time.
A: The orgy of deers, I had never heard of.
L: No, it is not a real orgy, where everybody flirts with everybody. The leader fucks the other deers, that's all.
A: I see. But I still not see the connection with Scajola and Berlusconi…
L: I arrive. The dominant deer, in return for this unlimited power, offers protection and food, warm dens and soft beds to rest, all at one condition.
A: What condition?
L: The deers must never endanger the peace of the flock and especially of the leader. Do you know what the motto of firefighters is? Down you, down us! Well, for the Canadian deers is: Down you? Down you and your entire family, we don’t know you and we never meet you before!
A: That’s solidarity…
L: The unfortunate deer is removed with silent contempt, although the leader publicly regards him with honors. Since then, the outcast is called the horned ad interim.
A: In what sense?
L: In the sense that the expelled deer is a cuckold: he was betrayed by his boss.
A: Why ad interim?
L: In Latin interim means temporarily. In fact, sooner or later someone else will be horned… 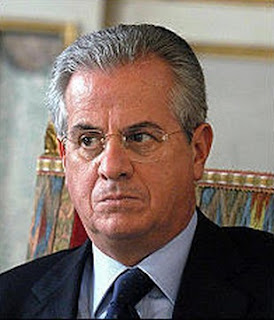 The News: Scajola: "Berlusconi abandoned me."
Stories and news: “invented” Stories, fruit of my imagination, inspired by “true” media News.
Share the post: