May 21, 2010
Stories and News No. 177
There is always a first time for everybody: today I want to recognize that Berlusconi is coherent in a thing.
When he applies his proverbial strategy of accusing someone and next day amending, he doesn’t distinguish between enemies and allies.
Admittedly, in this is a consistent person.
I'm talking of course of the following sentence, present in all Italian press, about the recent corruption investigations: "These are personal and isolated cases..."
He made this statement answering to a request by Bruno Vespa, the famous Italian journalist - known in Italy and worldwide for his ‘intellectual honesty’… - who asked an opinion on the allegations received by PdL colleagues Verdini and Scajola.
While they surely have not liked it, a few hours later the timely clarification / correction by the premier arrives: “I did not refer to them…”
It’s now a classic of Berlusconi’s repertoire, an author that when there will be no more here many will miss him…
The Story:
Once upon a time there was a bazaar.
In the bazaar there was a fruit stand.
The fruit stand was run by a greengrocer that we may call Silvio.
I know it's obvious, but Silvio is a common name, is short and easy to pronounce.
This is the only reason why I chose it.
I could swear on my children, because this is a story and I can shoot all the shit that I want.
I said, Silvio had this stand which some bad voices from the Left side of the market said he had obtained it with the help of shady people.
He had always denied and I must admit that, despite these slanderous accusations, his desk was always visited by a large number of customers.
The fact was that Silvio was clever with people.
He was a skilled seller and had an extremely effective gab.
You could understand everything he said and that was really his strong point.
His fiercest competitors, the greengrocers on the left side of the market, were managed by merchants who spoke in strange ways.
I ask: when are you selling apples, pears and bananas why do you use all those words that ordinary people don’t understand?
On the contrary, Silvio was simple and direct: our stand is safer and our fruits are fresh for all.
He was an incurable optimist; he always looked the half full glass, even when the glass was empty, even when there was no glass.
However, things didn’t go always good for the best greengrocer in the last 150 years, as he wrote on the sign of his stand.
It happened that some ladies came one morning to protest.
Two types of fruit which had always been proud of, Verdini apples and Scajola oranges, seemed to be hopelessly rotten.
The women also raised their voice and Silvio’s new wife of Silvio, Bruna the Wasp - because of her pungent irony - intervened to quiet: "Calm down, ladies, relax. Stop squawking. We sell fruit, you can find geese on the left..."
The customers didn’t laugh at all, and hoisted it even more when Bruna immediately passed the ball to her husband: "Wait a minute, now Silvio will serve you…"
The greengrocer came forward and, widening his usual cheerful smile, said: "All right, ladies. Verdini apples and Scajola oranges are only isolated cases. Our fruits are fresh and healthy."
Once the rebels withdrew, Silvio gathered the rotten fruits in a large basket, took it in back of the bench and before throwing the contents in the truck, stopped and thought: "I need a bigger truck…"
Inevitable, since it was already filled with Mills melons, Dell’Utri mandarins and especially Bertolaso pears.
All isolated cases. 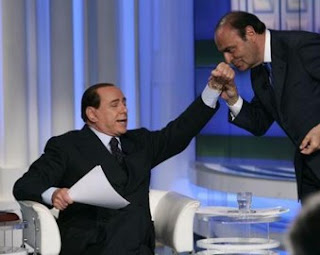 The News: "These are isolated cases..."
Stories and news: “invented” Stories, fruit of my imagination, inspired by “true” media News.
Our son was born, Saturday June 5 2010, Storytelling in Rome.
Share the post: