May 12, 2010
Stories and News No. 170
Tell me if this is not material for a comedy.
I read in the newspapers that yesterday at Palazzo Grazioli Berlusconi met PDL coordinators Ignazio La Russa, Denis Verdini and Sandro Bondi - besides Altero Matteoli and Gianni Alemanno - to decide who today would have seen Gianfranco Fini.
The chosen is Verdini.
Silvio, why don’t you do it by yourself?
But was not you the man with the balls?
The Story:
In the elegant salon of Palazzo Grazioli there is a deafening silence.
Bodied sweat drops bead the foreheads of the three PDL coordinators sitting at a table and each one of them differently faces its own tension.
Minister La Russa, known for his incisors, is involuntarily biting his lips and is bleeding on the chin.
These are shocking images, I tell you before.
If you dare stop here, I'll understand.
Minister Bondi eats his toenails after having brushed those on hands.
Matteoli has already vomited twice, although he has other things to worry about.
Verdini seems the most calm.
His temple is damp too, but he shows a fixed grin on his face as petrified.
Since joining he doesn’t said a word, he looks like a wax statue.
In front of them, there is Mayor Alemanno who holds in his hands a hat with three names written on cards.
At his side Berlusconi is about to get one.
The person drawn at random the next day will have to meet a man who has become a nightmare personified for the people of freedom.
Many names preceded him…
The Nameless, you-know-who, Nosferatu, two socks…
"Gianni", Silvio says to Alemanno, seeing the hat shivering, "What? Are you trembling?"
The others are almost all looking perplexed.
They don’t recognize his voice.
Berlusconi for a fleeting moment covers his mouth with a hand.
"I am the Jesus Christ of politics," Silvio exclaims afterwards. “I am a patient victim, I sacrifice myself for everyone!"
His men look at him even more confused, except Verdini, that watches him grim.
"They keep calling me a dwarf, but I'm taller than Sarkozy and Putin…" Berlusconi adds before turning a tap on his brow, as if he had just remembered something.
"President", Alemanno asks, "is everything okay?"
Silvio nods nervously and breaking any delay puts his hand into the hat, pulling out a card.
The suspense is enormous.
La Russa is a mask of blood and must be subjected to cosmetic surgery to reconstruct his lower lip.
Bondi began chewing the fingernails of Verdini, who seems not to notice anything as still smiling.
He shows a frowning face, angry eyes and a smile.
Can you imagine anything more terrifying?
At that while Berlusconi clears his throat and reads aloud the response: "Denis Verdini!"
La Russa faints while Bondi has a heart attack.
Incredibly, Verdini remains unaffected and continues to smile.
In short the battered ones are transported to the emergency room, Matteoli runs into the bathroom and Alemanno is to go out with the hat still in his hands.
"Stupid," Berlusconi yells, "Leave the hat here..."
"Why?" the mayor of Rome asks.
"It’s not your business!" The prime minister answered, knowing that the remaining cards are identical to the chosen one.
Once alone with Verdini, the latter stands up and exclaims: "They keep calling me a dwarf, but I'm taller than Sarkozy and Putin? Did I really say that?"
"Yes, president", the false Silvio answers.
"Well, don’t say it anymore…" Berlusconi with Verdini’s mask says.
"However," he mutters, "I hope that tomorrow he is not aware of anything..."
Then fake Berlusconi smiles.
After the extraction task he cannot wait to participate in the first sexy round of the evening… 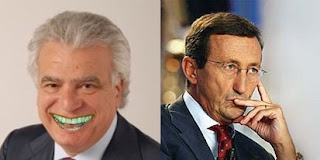 The News: Verdini will meet Fini.
Stories and news: “invented” Stories, fruit of my imagination, inspired by “true” media News.
Share the post: