From Greece Peoples of Europe rise up

May 04, 2010
Stories and News No. 164
Today in Greece a great 48 hours strike begins to protest against the austerity plan implemented by Papandreou government.
Concurrently, here is a fact which I think is particularly symbolic: the communist trade union Pame, the All-Workers Militant Front - close to the Communist Party of Greece - has occupied the Acropolis and some protesters hoisted a banner which says: "Peoples of Europe rise up."
Oh, how I love this phrase.
Do you know why? You could say that’s because of the rise up, because this verb stimulates my perennially boiling rebel mind.
Maybe.
But what I appreciate most is someone who speaks of the Peoples of Europe and not always States, Governments and especially Banks…
The Story:
Peoples of Europe rise up!
Peoples of Europe shut the TV and rise up from those graves disguised as chairs…
Because you are Europe.
You are Italy, Greece, Germany, France and all the other countries.
They are just those who have patented the name.
They are just those who understood how to use it first.
They are just who will run away first when the ship will sink.
Peoples of Europe turn off the engine that chained you one behind the other and rise up from those prisons disguised as cars…
Because you are the every day walking, working and fighting Europe.
You are the engine, not that under the hood.
They are traveling, not you.
They decide the speed, not you.
They arrive at the finish, never you.
Peoples of Europe pull that damn phone from ear, crash it in a thousand pieces and rise up from that slavery disguised as freedom…
Because you are the ones who have to talk each other, face to face, everywhere.
You should be intercepted; you should be those who say the words able to bring down the house of trick cards they have built around you.
They have never had anything interesting to say.
They never needed to tell you the truth.
They are just a good bluff.
Peoples of Europe, at least for now, turn off also this computer and rise up.
Leave home, go to the streets and squares, and not because someone has invited you to do from Facebook…
Because those streets and squares are yours.
You are the ones that have built them.
You are the ones that daily pay their price.
They are only the ones that have stolen them...
PS: Now someone will say that I am a communist… 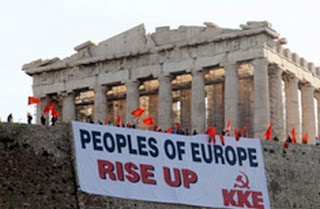 The News: "We pay for sins of others."
Stories and news: “invented” Stories, fruit of my imagination, inspired by “true” media News.
Share the post: