May 25, 2010
Stories and News No. 179
I know and I state that this is a trite post.
However, I believe that in my country we are so used to the injustices that it became normal, obvious.
In other words, trite.
So, why we all sixty million don’t agree on what is trite?
All the newspapers announced that Berlusconi government, following other countries, is preparing to implement a plan of cuts and sacrifices very hard.
President Napolitano calls for equitable sacrifices, made with sense of responsibility.
I think he’s right.
I want to comment how politicians do when the president speaks: "Napolitano as always showed great sense of State and high moral quality."
I share his words, and since we must make sacrifices, I ask the opinion of our fellow citizen, who lives on a salary - to its minimum - on average ranges from 270 to 590 euros per month...
The Story:
My name is Paul and I am fifty years old.
I am farm worker and for my job I receive 590 euros per month.
I'm not complaining.
I'm lucky because I could earn even less.
I've heard on television today that due to the crisis we have to make very hard sacrifices.
That news doesn’t especially hit me.
Hard sacrifice is the soundtrack of my life.
So I'm not complaining.
I might even be one of the unemployed two million Italians.
I also heard that the President has requested equitable sacrifices.
That’s right.
It’s what I do at home.
When you need to save the first cut is the unnecessary part.
My wife and I have a life of cutting.
But I'm not complaining.
I could be an insecure working young who stays in a call center, earning less than me.
If we need to make sacrifices, I made small little bill.
I was ever clever with numbers, my mother often said.
In the Italian Parliament the deputies are 630.
Excluding allowances on expenses, telephone calls and others, each one of them gains 5,486.58 euros per month, adding a so-called Diaria of 4,003.11 euros per month more.
The result is 9,489.69 euros per month.
An Algerian farm worker friend of mine - that in his country graduated in economics, told me that in France the deputies gain 5,180 euros per month.
Now, since we have a debt of 1,800 billion and that the French one is much smaller, it seems fair to begin to cut the salaries of Italian parliamentarians, at least comparable to that of the French.
There would be a saving of 4,309.69 euros for every deputy.
Multiplying by 630 we have 2 million and 715,104 euros per month.
In one year we could get 32 million euros and 581,256.4.
If Berlusconi government asks for sacrifices I’m ready.
There is a crisis, but I’m not complaining.
I could live in countries much more poor than mine, as my friend from Algeria knows.
But if my politicians don’t start to cut by their salaries I'm not complaining.
I am angry… 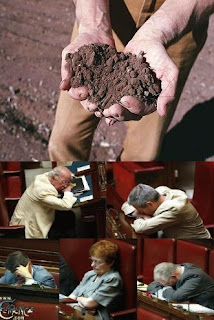 The News: Sacrifices must be fairly distributed.
Stories and news: “invented” Stories, fruit of my imagination, inspired by “true” media News.
Our son was born, Saturday June 5 2010, Storytelling in Rome.
Share the post: