May 28, 2010
Stories and News No. 182
"They say I have power, but I have not. Maybe my hierarchs have, but not me. I can only decide to get my horse to the right or left, but nothing else."
These words were uttered yesterday by Silvio Berlusconi, which he attributed them to Benito Mussolini.
Now, aside from the fact that according to me, also the horse broke its balls and who is taking him back is Emilio Fede, I think that this latest grotesque speech to the international audience of our Prime Minister completes the puzzle..
It is a disturbing picture.
We joke, but here the situation is becoming more serious day by day.
Therefore, forgive me if I disguised my feelings with irony and zany inventions but I never found a better way to convey what passes in my belly…
The Story:
Letter to the Government of the United States of America.
Dear Obama,
first of all I want to express my sympathy to you and especially to your fellow citizens who have been affected by the terrible misfortune of a leak of oil in the Gulf of Mexico.
I read today that BP, through the Top Kill plan, should finally have been able to stop the oil spill.
I am very pleased and I really hope it works, because in this case, I have an important request to you.
Many history books, often emphasized by Italian right governments, told that your intervention in World War II to liberate us from Nazi-Fascism was crucial.
I don’t want here to discuss whether your initiative has been really driven by the desire to free us or not, in my humble opinion I think that our country has been released from Nazi domination, but that fascism has never been truly defeated.
With this I'm not asking you to plan yet another peace mission to invade Italy and restore democracy.
It could be logic, I can understand, but after the recent examples, I hope it won’t happen.
Maybe, if it were to be confirmed as winner, could you lend us this Top Kill and allow us to stop our black spill, which even today, since the end of Second World War, continues to besmirch our land and its history?
We don’t deserve a Prime Minister who before the world press impunity compared himself to the dictator that has almost destroyed our country.
We do not deserve to see the name of our nation being continually put near those of countries which are under effective dictatorship.
We don’t deserve a government of politicians who are the highest paid in the world and live as demigods.
I’m talking about everyone of them.
Because if you get ten thousand euros per month excluding the cost, you can speak of the fucking crisis you like, but until you halve your salary, right or left, for me they are all the same.
Am I indifferent or an anti-politics guy? No, I only show elementary good sense in not wanting to be fucked.
We don’t deserve another law that cuts the legs of the judges and press to encourage mafia gangsters and especially their friends.
We don’t deserve national TV news so, I repeat, so partisan.
A few days ago, someone commented my post by saying that we deserve these politicians, because everyone has the government that deserves.
I don’t accept it.
I didn’t vote these people, none of them.
Many people and I do not deserve this fascist spill. 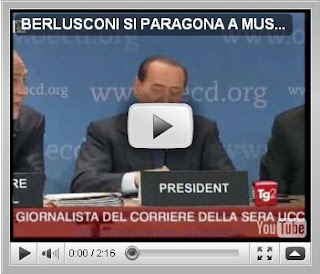 The News: Berlusconi: I have no power.
Stories and news: “invented” Stories, fruit of my imagination, inspired by “true” media News.
Our son was born, Saturday June 5 2010, Storytelling in Rome.
Share the post: