May 17, 2010
Stories and News No. 173
I don’t want to write a polemical post.
However, reading about the end of two more young lives among the Italian troops in Afghanistan I have to remind this video: 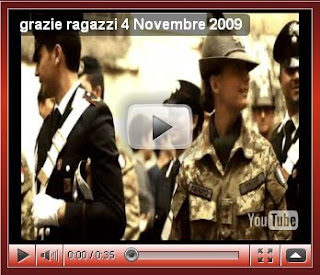 The title is thanks guys (grazie ragazzi).
It has a certain effect watching it today, isn’t it?
Someone might consider it inappropriate and others could find it right.
Yet in Afghanistan, as in Iraq and many other parts of the world blessed by the humanitarian interventions of foreign benefactors, this sometimes happens: people die. Thanks guys, the video above says.
It’s fair that also the families who have been robbed of their loved ones know who to thank...
The Story:
The first gratitude goes to the United States of America, to the Bush administration that started the vital peace invasion and to Obama, democratic to withdraw from Iraq but not enough to leave Afghanistan: thanks guys…
The second is obviously for the Italian center-right and center-left politicians, which, no ifs and buts, all these years have supported this peaceful action: thanks guys…
The third, the more imperative one, goes to my fellow citizens that since today with their votes have kept them in parliament: thanks guys…
The News: Two dead soldiers in Afghanistan.
Stories and news: “invented” Stories, fruit of my imagination, inspired by “true” media News.
Share the post: