May 10, 2010
Stories and News No. 168
Mala tempora currunt, the Latins said.
It means bad times are upon us.
In my opinion, despite the black background of this blog, I am not a pessimist nor nostalgic. I don’t think we live in a so terrible period compared to the past and I know that the years before us have been marked by moments much more tragic, violent and inhuman than now.
However, if there is one thing that distinguishes today is that regardless of the seriousness of what happens, we have the impression that nothing changes.
Call it a kind of addiction; give it the name you prefer but this almost never being accountable for what directly concerns us is in my humble opinion a modern trademark.
I don’t like it…
The Story:
This is my resignation letter.
I resign.
No ifs or buts.
Because there are no excuses for what happened.
There are no personal, family and psychological problems to justify that, there is no reason for such actions.
Here we are not talking about a frustration foul over a soccer cup final.
Those are rash gestures that can only offend the president Napolitano.
I am not president of anything; I am a man like many, people who daily see rash gestures with their own eyes, in everyday life, also made by the last persons we may think.
Certainly this is not the last piece of the kingdom called Paradox, that one of terrorist humanitarian workers, just to be clear.
The fact is that I am tired.
Do you know the other absurd contradiction of this farce called civil society?
Since many years, every kind of government still continues to use the term tolerance related to foreigners.
We must be tolerant of the Africans, Romanians, and Chinese.
We have to be tolerant towards homosexuals, we need tolerance towards those who are different from us, tolerance of the others that make us afraid.
Shit, I and many like me have never been afraid of differences! You have told us that we had. I like women because they are different from me, I like the countries and cultures I do not know because they are different from me, I'm attracted to all different people from me, because I have a brain in my head and the brain, if it works, grows and lives when meets the new ones.
Essentially, since years they're telling me to tolerate what can only improve and enrich me. At the same time they stuck in my throat violence, corruption, dishonesty and the worst things men can do by very Italian citizens without even asking if I want to tolerate it.
It’s just so.
Well, that’s a shameful deception which I no longer tolerate.
I am writing here because I want to remember: I don’t tolerate violence, I don’t tolerate abuses of power, I don’t tolerate injustice, I don’t tolerate bullying.
I must not.
That's why I resign from the cops who beat Stefano Gugliotta.
If they don’t make it, I do.
Honest police does not deserve these people.
As guys like Stefano don’t. 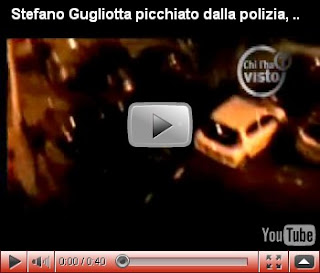 The News: "Our son beaten by police."
Stories and news: “invented” Stories, fruit of my imagination, inspired by “true” media News.
Share the post: