Berlusconi and Brancher history of sex

June 28, 2010
Stories and News No. 203
"Italy lost the World Cup and gets angry with me," Berlusconi's government symbol Minister Aldo Brancher complains.
It seems that the impeded minister will no longer be able to legitimate his impediment and on July 5 he should therefore appear in front of the court at his trial.
However, as Senator Stefano Ceccanti insinuated, Minister Brancher’s reverse is not due to a sudden surge of institutional sensitivity or accuracy.
"If the court had decided to consider the legitimate impediment exceptionable," the Senator says, "and if, as yesterday the defense of Brancher had announced, the Prime Minister had proposed allocation’s conflict before the Constitutional Court, the latter could blow the law up as unconstitutional already in October, leaving for a year Berlusconi, pending the constitutional Lodo Alfano, without a shield."
Oh, but is everything in this government related to him?
What's behind?
Of course, I ask what's behind to the famous American of Italian descent sexologist Lisa Pointgee.
The Story:
A: Dr. Pointgee, good morning. First of all, I offer my sympathy for the recent defeat of the U.S. soccer team by Ghana.
L: Well, that's like a homeless man offered to give a loan to a millionaire who lost his wallet…
A: You’re cruel.
L: I'm not cruel. Someone says that in Italy were no phenomena. Yes, only people like Totti, Cassano and Miccoli too, if he had not injured.
A: No... Are you telling me that you supported Italy?
L: Remember that I am an American of Italian descent, not Padane. But let’s pass to the questions…
To: Did you read about Brancher news, the last minister wanted by Berlusconi?
L: Yes.
A: What's behind?
L: You should intuit by yourself, now. Is it possible that after our many meetings you still didn't understand what really moves the politics in your country?
A: A history of sex?
L: More preciously, a dynamic of a sexual nature. And the question of what is behind, as we say sexologists, is the classic Vaseline on anus.
A: You say so. Can you explain better?
L: The erotic dynamic is between Brancher and Berlusconi.
To: Berlusconi… could he be out of this?
L: The day it will happen the sexual dynamics and politics as you know will end too. Or…
A: Or?
L: Or you will elect another Berlusconi. That will mean that we still meet here, I suppose.
A: You were saying that the erotic dynamic is between the two.
L: Yes. That’s a textbook case, known as the Multae vitae anus, or the anus with many lives.
A: What?
L: The anus with many lives is the ass of a person who’s particularly resistant to be defiled.
A: Do you mean buggered?
L: In other words, yes. This very tough ass has many lives, other butts that in its place get violated.
A: Do you mean buggered?
L: In other words, yes.
A: Let's see if I have correctly understood. Berlusconi is the man with tough anus and Brancher is one of his lives?
L: It's obvious.
A: Who are the other anuses?
L: Well, the prime minister has given power to many people, but they’re not all. There are also those who have got nothing by Silvio.
A: Who are they?
L: All of your fellow citizens who voted for him... 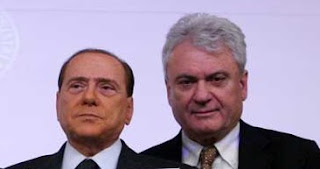 The News: Ceccanti: Brancher’s step back is to save Berlusconi.
Stories and news: “invented” Stories, fruit of my imagination, inspired by “true” media News.
Share the post: