Berlusconi and Gaddafi history of sex in tent

June 14, 2010
Stories and News No. 193
Once again we must say meno male che Silvio c’è (Thank God for Silvio).
Many newspapers tell that thanks to Silvio Berlusconi in Libya, Colonel Gaddafi has allowed the release of the Swiss entrepreneur Max Goeldi and the three Italian vessels that were seized.
Nevertheless, forgive me, but I am one of the few, very few Italian citizens who tend to distrust what the press say and, above all, everything about our Prime Minister.
So, just to have a clearer idea, even today I ask the opinion of the distinguished American sexologist Lisa Pointgee.
The Story:
A: Dr. Pointgee, what a pleasure to have you again here.
L: Hi.
A: Excuse me, but why are you always so cold? After all, you have Italian origins…
L: Well, let’s continue with these clichés. Maybe now you will ask if I play the mandolin…
A: Okay, forget it. Do you read about the Berlusconi’s last successful diplomatic mission?
L: Are you referring to the recent visit by Libyan dictator?
A: Dictator? Do you mean Gaddafi?
L: Yes, dictator. Why, what’s him for you Italians? Is he democratically elected?!
A: No…
L: However, behind the meeting between the two leaders, there is obviously a history of sex.
A: Of course.
L: Why are you sarcastic?
A: No, no sarcasm! Tell me, I'm carefully listening.
L: I said it’s clear that between Gaddafi and Berlusconi there is a history of sex. We sexologists call it transitoriae proprietas analysis. That is, transitive anal property.
A: I still doubt the Latin teachers in USA…
L: Why?
A: No... You know, I'm ever doubtful.
L: It hurts. You should relax. How's your sex life?
A: Hem... sorry, can we back to the point?
L: Yes, as I was explaining, the meeting between your Prime Minister and the Libyan dictator is a textbook case. Moreover, you can intuit just reading the various statements after the conclusion of the story.
A: Really? What statements?
L: As you know, with the arrival of Berlusconi, Mr. Max Goeldi was released.
A: Yes.
L: And what did the Swiss say, among other things, before boarding the plane to go home?
A: What did he say?
L: They were very hard months. I will never return to Libya, it was hard. It’s evident what the word hard refers to, right?
A: Evident.
L: And all thanks to the arrival of Berlusconi. In fact, what have Libyan authorities said about your prime minister? The role of Silvio Berlusconi to resolve the dispute was decisive. Now, if two plus two equals four...
A: Yes... but can you explain?
L: Explain? Could it be clearer than that?! In that tent the Swiss was undoubtedly a passive subject. Then Berlusconi came and thanks to the transitive property the situation was unlocked.
A: Does that mean that Silvio became the passive subject?!
L: No, in no way. Your prime minister is never a passive subject. You Italians should have understood. He only offered to Gaddafi… an alternative target.
A: How could he do?
L: Oh, it was so easy to Berlusconi. You know, among his people, there are a lot of men ready for him to that kind of hard sacrifices… 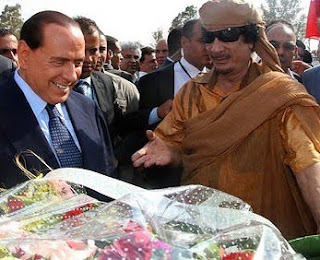