Berlusconi is in danger: no trial for his attacker

June 30, 2010
Stories and News No. 205
Well, this is a week of important acquittals.
According to Minzolini’s Tg1 the first is for mafia’s friend Marcello Dell’Utri.
And now we have Massimo Tartaglia, the man who attacked Berlusconi, acquitted because declared unfit to stand trial.
He will remain in a therapeutic community for a year, with the prohibition on participating in public events.
"This ruling prompted great preoccupation and perplexity..." People of Freedom spokesman Daniele Capezzone said.
In my opinion, it prompts especially preoccupation.
I think that if Berlusconi has enjoyed the acquittal of Dell'Utri and - unless surprises from the Court of Cassation – he will embrace him once more in just seven years, after one year Tartaglia will be back in circulation.
Not to mention all the other mental sufferers that live in Italy…
The Story:
Berlusconi is in danger.
That's not a test.
It’s not a joke, because you cannot joke with madness.
It jokes with you.
And you never know when you get the trick and how long it will last.
As you have no idea how much ridicule it will be.
Foolishness is unpredictable, that’s trivial and well-known.
The crazy person one day says one thing and the next, indeed, even after a few seconds he contradicts himself.
He is continuously characterized by unbalanced blunders and gestures, causing serious embarrassment to those who accompany him.
Again, the situation is serious.
For once I agree with Capezzone, who was too moderate.
Tartaglia ruling, more than preoccupation and perplexity, puts the prime minister in a disturbing position.
Do you realize?
A guy, who pulls a blunt thing to another’s face, wounding dramatically him, is acquitted.
And we're not saying acquitted as Dell'Utri was, which for Tg1 means seven years in prison, but only a year in a therapeutic community.
This time the communist judges have exceeded the limit.
This decision creates a terrible precedent for the Prime Minister.
I tell you just some numbers.
According to Il Corriere fifteen million Italian citizens at least once in their lives go to a psychiatrist or make use of psychotropic drugs due to mental problems.
One million of them suffer from serious diseases and at least half are schizophrenic.
The premier said that the crisis is now behind us - and someone even commented saying yes, it’s in our ass… but Silvio now has something else to think.
In its place, after this ruling, I would be much more careful in public outings.
You know, crazy people can be anywhere.
Some are also upset.
If they are acquitted too… 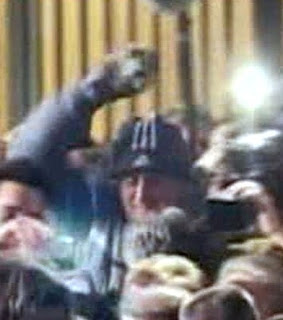 The News: According to judges hurting Berlusconi is not a crime.
Stories and news: “invented” Stories, fruit of my imagination, inspired by “true” media News.
Share the post: