June 18, 2010
Stories and News No. 197
The trust is an important thing in everyone's life.
I don’t know about you, but I'm not a person who easily trusts the others.
Time ago yes, but then, after the years, the disappointments I have got made more suspicious.
That’s normal, I think.
I perfectly know it’s wrong if in the end you don’t trust anybody, that’s clear.
You have to trust someone.
Anyway since I overcame the forties I am much more cautious in granting trust to others.
Imagine the full trust or the full solidarity.
The solidarity is something precious too, don’t you agree?
That’s when you give it and when you receive it, of course.
But even in this case, I’m not used to share it at random without thinking before.
Here is an example.
Image that someone I know is accused of a deplorable action.
Even if I loved him, he has my trust and solidarity if and only if he is innocent.
If he were found guilty, well - only in the case we were bound by a feeling of affection – I would feel sorry for him.
Otherwise, why would I insist in giving him trust, indeed, full trust and solidarity?
The Story:
Once upon a time there was the land of trust.
The land of trust was also the land of solidarity.
But it was best known for in the former way.
Holland is famous for its windmills, but even the smoke.
That’s typical.
The land of trust, but also of solidarity, began to earn that name since 2001, when the opposition asked the Senate to impeach the government in response to horrible facts during the G8 of that year.
"In the Senate there are friends of the violent people," Gianfranco Fini said, much time before remembering to have the balls.
Trust was voted by Government majority to the Interior Minister Claudio Scajola, a person so worthy to deserve it to pay him the house without his knowledge.
So, in that same year he also got President Ciampi’s trust.
Yet the allegations to police for those tragic days in Genoa were very serious, however, it could not get the solidarity of Berlusconi?
Isn’t he the man more trustful in the land of trust?
In 2003 the police have got other charges.
"That’s an attempt to turn attacked people to aggressors!" the new Interior Minister Giuseppe Pisanu denounced. And who expresses full solidarity with the police? Clemente Mastella! Try to understand, is a question of consistency. He is a person who needs it all the time, just as the Minister Gasparri, who was also united with the agents.
In 2007 De Gennaro is investigated.
Prime Minister Prodi said he will replace him, but gave him his trust.
As if to say, we of Center Left, when it needs to trust or be united to someone ever demonstrate responsibility.
In 2009, another G8 came and other trust offered to police officers, this time from Guido Bertolaso.
He’s a man that without the trust of all the governments of these years, how would he always stay on his place?
Let’s arrive to 2010: De Gennaro sentenced of one year and four months for the acts of the G8 2001.
And the trust still comes by the Interior Minister Maroni.
This is the land of trust and solidarity.
But how it could be wonderful, if it had been the land of justice and honesty... 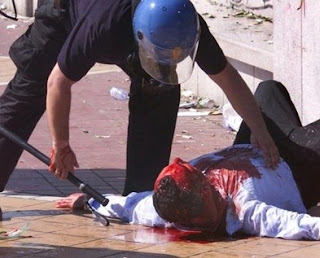