June 15, 2010
Stories and News No. 194
Between Monday and today the Roman students will face the Italian composition.
Among the subjects, there are the following: Letter to a friend, a project that I spent during the year, describe the 900 from a historical perspective, describe the Second World War.
Thirteen years.
That’s an important age, as all those that run through the time that I consider most interesting in our life: adolescence.
I’m referring to the period in which everybody hatched a huge need to be heard.
With good reason, I add.
Each one of adults should pay close attention to what girls and boys, not only the Roman, but throughout Italy will write in these days.
And not for rhetoric as hypocritical principles, such as these young people will be tomorrow's adults.
Now they deserve our ears and eyes.
Because even now, without saying or doing anything, they are better than us.
The Story:
Title: I am confused.
Composition:
My name is Luca, I’m thirteen and I am also confused.
I'm confused for many reasons, but I'm going to order.
First of all, I am confused by reading the subjects that you have proposed.
Are you kidding me? No, because if this is a joke by my brother Emanuele, tell me.
He constantly teases me, but I’m never so angry, because his jokes are never cruel.
Annoying, yes, and I get a little bit irritated, but the next day I don’t remember why and it's okay like that.
It’s okay like that.
My mother always says so, to mean that we can go forward, that nothing happened and that much more is ahead.
Anyway, I was speaking about the composition subjects.
Thinking carefully, this cannot be a joke by my brother.
You don’t even know who Emanuele is.
You barely know me…
Why do I say that you barely know me?
For the same reason I think this Italian exam is all a joke.
If you knew me a little, not too much, you wouldn’t have proposed me these arguments.
You should have known that I've already done this composition, with all the subjects inside.
Just this Sunday, I wrote a letter to my cousin, who is a real friend to me.
Here's an excerpt:
Dear Graziano,
this week we’ll have exams.
I’m not nervous.
Yes, I’m a bit afraid, but most of all I am confused.
In these three years of school teachers have told us many things.
The history teacher has described us the 900.
He told us that in Italy there was fascism and that it fell in 1943. So why Freedom Press says that we are a semi-free country?
He told us that in 1946 Italy became a Republic, a nation where the power belongs to a large part of the people. So why today we are commanded by only one man, who always does what he pleases?
He told us that in 1989 the Berlin Wall fell and that this event also marked the collapse of communism. So why did that man who does what he likes keeps saying that his opponents are communists?
Our teacher told us also about the Second World War.
He told us that because of atrocities committed during the latter, in 1948 the nations signed the Universal Declaration of Human Rights. Why today most of them do not respect it?
Why, after millions of deaths, there are still people who consider the war as an opportunity?
Why after millions and millions of their dead, there are still people who consider the genocide of a population as a form of defense?
I'm confused, but I will not remain blocked to be just a spectator, like my grandmother does every day watching television.
At the beginning of this last school year I did a project, which I spent everything of me to.
But I’m not gonna tell you about it.
I don’t trust you.
You have to trust me.
After all, I can't certainly do more damage than you. 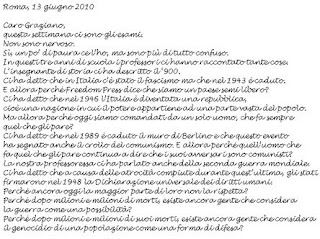 The News: 8th grade exams in the Italian school.
Stories and news: “invented” Stories, fruit of my imagination, inspired by “true” media News.
Share the post: