Italy Republic Day according to Plato

June 02, 2010
Stories and News No. 185
It was hard to find news about the Republic Day on Italian press.
It’s today, right?
It’s the second of June, isn’t it?
I also checked the calendar twice…
What does it mean?
A survey says that 40% of Italians consider it an insignificant anniversary.
Why?
Maybe because the day we celebrate the people’s achievement of state sovereignty we simply pay tribute to soldiers and weapons?
I ask an opinion to an exceptional guest as Socrates, that is, Plato’s Avatar.
The Story*:
A: Mr. Socrates is an honor to have you here.
S: Thank you. But no mister: just Socrates.
A: As you wish. But you are Plato, don’t you?
S: Plato? Who was he?
A: Yes, okay… Listen, I know you have done important studies on the concept of the Republic.
S: So they say.
A: I would ask you an opinion on my nation Italy where, just today, we celebrate the anniversary of the 1946 referendum, in which citizens chose to be part of a republic.
S: Congratulations.
A: Thanks. For example, let’s start from justice. What is justice in your ideal republic?
S: As I said a long ago to Glaucon… Do you know Glaucon?
A: No…
S: I said, as I answered Glaucon, justice is a fundamental good, because it brings benefits not only to us but also to others. No one should enjoy justice to the detriment of others and vice versa.
A: Really? In Italy there is a man... but I don’t want talk about him, go ahead.
S: Justice cannot be detected at its best in a single person, but in the State. A just State is what we all should aspire.
A: In fact, in my country we have an unbearable runt... but sorry, continue as well.
S: Essential parts of the ideal republic are the governors. They must be philosophers, intellectuals, persons with extraordinary sensitivity and curiosity for understanding, incredibly greedy for knowledge…
A: Knowledge? In Italy there is a man – he’s not the only one, being honest... - who is so avid about everything that... Well, forgive me, continue.
S: Justice works only when the governors are in harmony with the other two parts of the republic: people and guardians. Otherwise, the power may end up in the hands of a tyrant...
A: A tyrant?
S: Yes, a tyrant. However, he is an unfortunate and unjust man, living in fear, alone, with no real friends and surrounded by bad and corrupt people.
A: I don’t know if he’s really unhappy because he always laughs, but we have a man who perfectly fits to this description… but I do not want interrupt, please…
S: Other key components of the republic are job and family. Everything works at its best when each citizen can do what he can do better. That is, if every task was entrusted to the one who’s the best to finish it, the entire community gets benefits.
A: Meritocracy…
D: Sure. In addition, everyone must have a job. There should be no rich and poor people. Otherwise, rich persons would not work and the poor one would live with the sole aspiration of becoming like the former. The governors must not have private property, if not they would be in clear conflict of interest...
A: Are you telling me? In Italy we have that man… but forgive me, go ahead.
S: I told you about the family. It should be abolished, otherwise it ends up that the shoemaker's son becomes a shoemaker, the son of the architect becomes an architect and so on, in the form of a presumed virtuous family tradition.
A: Nepotism…
S: Yeah.
A: Look, the republic that you describe is proper ideal: a true utopian.
S: I realize, but it is important to always have in mind. It’s the horizon that you should strive for.
A: And if I confide you that in Italy there's a guy at the head of a government of a republic that is exactly the opposite of what you imagine?
S: Well, I would tell you that today you have nothing to celebrate...
*Inspired also by Plato’s The Republic. 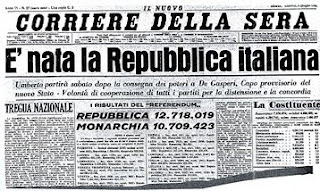 The News: 40% of Italians consider insignificant the Republic Day.
Stories and news: “invented” Stories, fruit of my imagination, inspired by “true” media News.
Our son was born, Saturday June 5 2010, Storytelling in Rome.
Share the post: