Padania does not exist, Democratic Party is not left and I am not feeling that good myself

June 22, 2010
Stories and News No. 199
"Padania doesn’t exist," Chamber of Deputies President Gianfranco Fini said. "It's a happy propagandist invention."
WTF!
I risked an infarct.
How is it possible?
I can’t believe…
Padania does not exist?
Is it just a propagandist invention?!
No!
They have a newspaper, La Padania.
They also have a radio to cheer against Italy.
Come on…
If it were true, then I would really start to doubt everything…
No, it’s false.
The Story:
It’s false.
Padania exists.
So, would you make me believe that Democratic Party young supporters don’t like the word compagni?
How do they prefer to be called?
Camerati!?
No, I don’t accept this.
Padania exists, the television said a billion times.
No, you do not convince me, I’m not so stupid.
Maybe now you come to tell me that there are people and unions in Pomigliano who went to the streets to defend their managers…
You cannot kid me.
Padania exists; otherwise they would not have elected Miss Padania, right?
So now you will tell me that there is a nun who became manager of a bank…
A Christian nun!
Christian, do you get it?!
Christians…
Those of Christian charity!
Come on, let's be serious.
So now you tell me that in Italy there are two ministers for federalism…
Two ministers for one ministry?!
But are we all mad here?
When will we end this absurd play?
Padania exists and everybody may see it.
It’s there, in the north of Italy.
Otherwise, nothing is true here.
Do you realize?
Then a guy wakes up in the morning and says that there is no center left, at most a center, because the left is out of parliament.
Another one jumps out and says that the center right is more right than ever, since it does not need center anymore.
A third one comes and says that we are in a semi-free country, ruled by corrupt and mafia people and if we’ll not go on the streets to surround the parliament things will never change.
Padania exists.
It must do.
Otherwise… 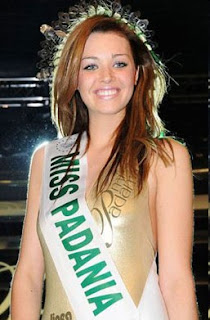 The News: Padania is a propagandist invention.
Stories and news: “invented” Stories, fruit of my imagination, inspired by “true” media News.
Share the post: