June 29, 2010
Stories and News No. 204
According to the appeals court PdL senator Marcello Dell'Utri had dealings with the Mafia since the seventies at least until the day of the murder of Falcone and Borsellino in 1992.
For this reason he was sentenced to seven years imprisonment.
This news confirms the doubts and suspicions that have been born in me at the time of the first instance of the trial.
I know, you will think I’m crazy, but I cannot anymore keeping me in this weight.
I need to vent…
The Story:
I have a theory.
I know it's mad, but I must speak, or I will burst.
In my opinion, between Silvio Berlusconi and the Mafia there is a link.
I understand this is a strong statement and quite risky.
Call it pure political fiction.
However, try to follow me a moment.
Indulge me.
Marcello Dell'Utri was found guilty of having been connected with the Mafia in the second grade of trial, particularly from the 70s to '92.
Now, Dell'Utri in 1974 entered into a society called Edilnord invited by whom?
Silvio Berlusconi!
This would be enough to validate my suspicions, right?
But there's not only this.
Also in '74 Dell'Utri was the man who made the murderer and mafia criminal Vittorio Mangano assumed as head of a residence.
Who is the owner of that home?
Berlusconi!
Do you understand that something stinks here?
In 1982 he was chosen as director of Publitalia, the company for the advertising of Fininvest, which later became CEO of.
And who founded both?
You might not believe, but Silvio did.
It could be just a coincidence, I agree, but... it could not be, right?
There is a possibility; at least you must allow this.
In 1993 Dell’Utri founded Forza Italy Dell'Utri with whom?
Berlusconi again!
I know mine looks like a delirium, I admit, however I cannot get rid of this mania.
If Marcello Dell'Utri was a mafia’s friend and he’s still near and with so many ties with Silvio Berlusconi, for the mafia transitive property, the Italian Prime minister was too.
Maybe he still is; what do we know about?
Well, I said it.
Call me crazy now… 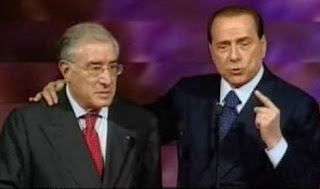 The News: Dell'Utri was sentenced to seven years for complicity with the Mafia.