Berlusconi is Caesar, here the evidence

July 15, 2010
Stories and News No. 216
I read that today newspapers tell once again something which puts dark veils on Silvio Berlusconi’s name.
Some of these media reveal that police associates the pseudonym Caesar, present in the wiretapping on the new P3 secret lodge, to our Prime Minister.
Moreover, if Berlusconi is involved, who would he have been if not Caesar?
Come on.
If Silvio is implicated, who else could be behind this Caesar, mentioned as the leader?
Moreover, I also have evidence that Berlusconi is Caesar!
The Story:
Berlusconi is Caesar.
In De Bello Gallico Caesar wrote: "Men willingly believe what they want to be true."
Come on, it’s him!
One million jobs, lower taxes for all, safest cities… it’s him without a doubt.
"The enemy would have victory if they had who knows how to win," Caesar said, according to Plutarch, in the biography dedicated to the dictator.
Now, tell me if this enemy does not fit with the Italian Democratic Party!
Caesar Berlusconi has understood from the beginning and he used it since fifteen years.
In my humble opinion, his enemies still have not found who knows how to win…
The following Caesar’s statement is extraordinary actual: "I love treason but hate the traitor."
The traitor…
Who is him?
This reminds me of that joke where there is Jesus who says: "Some of you will betray me..."
Judas with innocent tone replays: "Will I do?"
And Jesus responds kidding him: "Will I do? Will I do?!"
Anyways, listening live and especially all I assure it’s funny.
But now here’s what Marcus Tullius Cicero wrote about Caesar: "He had earned the ignorant multitude with gifts, buildings, donations of food and banquets. He bought his allies with prizes, the opponents with demonstrations of clemency, in fact he had given to a city, which had been freely, the custom to serve, partly due to fear, partly due to resignation…"
If I had not said that he was Caesar, who would you have thought if not him?
"He terribly endured the defect of baldness for which he was often mocked and insulted," Gaio Svetonio Tranquillo said about Caesar. "He was used to pull down from the top of the balding head…"
I mean, these are evidence.
Caesar or Berlusconi, he is the same person.
Now, Cleopatra left him.
All that remains is who will be Brutus… 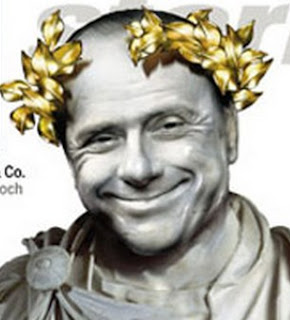 The News: Caesar is the pseudonym of Berlusconi.
Stories and news: “invented” Stories, fruit of my imagination, inspired by “true” media News.
Share the post: