Berlusconi PDL was created to amalgamate center right: here is the recipe

July 07, 2010
Stories and News No. 210
"The People of Freedom was created to amalgamate all the political traditions of the center right…"
Words by Silvio Berlusconi, in the footnote to the meeting he had yesterday with the faithful forzaitalians.
Now, putting aside the critics to the prime minister’s work, we must admit that this amalgam was not a simple transaction.
Sure, to make an amalgam of the traditions in the center left is much more difficult.
It's like trying to put together the chicken with cherry jam, Prodi and Veltroni are well aware.
Moreover, someone might point out to them: but why the fuck you insist with cherry jam? Satisfy yourself with the chicken! Oops… are you those of the jam?
Here is the problem: it’s not clear who's the chicken and who the jam.
That would mean that amalgam works.
Instead, while all seems to be all right, the Mastella sauce or the Bertinotti oil come out and everything goes to hell.
In contrast, the right side of the table holds about fifteen years, despite the Fini beans, called the Finiani, are tired to be the side dish.
They can scream how they want: if in the menu you’re a side dish, so you remain until the dinner ends.
Anyway, we must say that Berlusconi had a strong idea, a winning recipe, able to unite right, center and especially Lega Nord in a single dish.
What’s this idea?
The Story:
In a disturbing and possible future:
We are in a school as many of the Italian Empire.
Yes, Italy is no longer a democratic republic but an empire with an almighty sovereign.
It’s needless to say who he is.
He defeated cancer and then death, and even hemorrhoids.
The population accustomed to the change without too much difficulty.
As if nothing had changed …
I was saying that the scene takes place in a school as many and never before this as many was suitable.
In fact, all schools are equal and when I say all I mean all in the universal sense.
There are no more those useless classifications in elementary, junior and senior, first degree and second degree, public and private universities, long, short and circumcised courses.
Everything has been cut.
Now there is a unique school.
In this school there is only one teacher, indeed, the Master.
He is an essential figure in the formation of the students.
He is a sort of amalgam - a magic word in this story - of identities.
To put it simply, the Master is an omniscient teacher priest with absolute sexual freedom with students and not.
Maybe that’s the reason why the parents accompany children to school with considerable reluctance.
One day, the daughter of one of the few sinister psychotic nostalgic patient, raises her hand during the lesson.
The Master is somewhat surprised.
Normally he cannot be interrupted.
He talks and students learn, that’s how the school works.
Incredibly, the arrogant young girl asks a question.
The questions in the school are feared as a pimple on the nose of a supermodel before leading an important fashion show.
The question is this: "Master, how did the father of the nation, Emperor Silvio, an amalgam of the traditions in the center-right?"
The professor is launching an anathema to the rebel student, however, he hesitates.
Answering that question may be an occasion to reaffirm the greatness of the sovereign.
Postponing a few minutes the punishment of subversive girl, he so replies: "Before I give you a just punishment for your insolence, I tell you that your question is wrong."
"In what way?" she replies before the whole careful class.
"You see, the divine emperor never thought of doing an amalgam of traditions. Traditions can not mix. "
"The ideologies?"
"No."
"The principles?"
"No."
"So, what did he amalgamate to form the PDL?"
"The ass and the chairs."
A general oh rises in the classroom.
"What is that face?" the Master says. "The People of Freedom was born and went on with this motto: an ass, a chair. Otherwise, how you could unite in the same party secessionists and fascists?"
At that moment he hears a loud and angry voice by the microphones: "The Master is wanted by the Principal."
What a poor man.
He forgot that in that time the correct answers are feared more than the wrong questions… 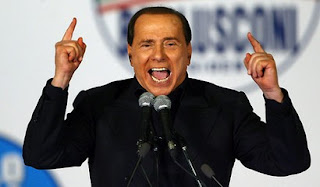 The News: Berlusconi raise a shields against the party currents.
Stories and news: “invented” Stories, fruit of my imagination, inspired by “true” media News.
Share the post: