L’Aquila earthquake victims protest and the lies of Berlusconi Newspaper

July 08, 2010
Stories and News No. 211
Yesterday in Rome we had yet another demonstration of what kind of country we have become.
The Committee 3e32, L'Aquila coordination network, had organized a manifestation in July 7, 2010, to bring to the streets the following demands: We first ask for the suspension of all taxes and charges, the freezing of loans and a series measures to support employment and the economy.
I also read on the site of the promoters that there was great participation, by local and national organizations.
Associations, political parties, committees, companies, municipalities and institutions like the University of L'Aquila and the Archbishopric.
Like most of you know, the procession was stopped by the police.
Consequently we saw another clash between officers and protesters, with three persons wounded.
The news was obviously on the front pages of all media.
As always, every newspaper tends to give a personal version of the facts.
The absolute objectivity does not exist, we all agree.
But there is a limit beyond which that personal becomes personal a lie…
The Story:
Once upon a time there was the editor of a newspaper.
Let’s imagine that he’s the director of a biased newspaper.
Anyways, this is bullshit.
All newspapers are biased.
So, let’s figure that our protagonist is the director of one of them.
Let us also that the newspaper belongs to the family of Prime Minister.
Add that, like all of the newspapers, it takes money from the State - which means the citizens – to live.
Now, let’s imagine that a large group of people, let’s say about five thousand, went the streets to protest against the government led by Prime Minister, whose family owns this newspaper, going behind one of the residences of the Premier.
Think that during the event there some avoidable accidents happen and three people are wounded.
Now, dream to be in the place of that newspaper’s editor.
He cannot ignore the news, indeed, he should not.
How can he tell it?
In one way, he has no alternative.
First, he must blame the accident to one of the main leaders of the manifestation:
The mayor of Pd uses 5 thousand people from Abruzzo as human shields and sends them to clash with the police. That was an irresponsible attitude that not even the noblest of causes could justify.
Second, he have to show that the demonstrators had already been satisfied:
L’Aquila Taxes: delay of 10 years. Recovery of not paid taxes by L’Aquila citizens for the suspension ordered by the earthquake will be carried out in 120 monthly installments from January 2011. This was announced by the Secretary to the Prime Minister Gianni Letta.
Third, he must divide the demonstrators, emphasizing those who think the opposite way:
Who is left in Abruzzo supports Silvio: "Rebuilding blocked by the City Mayor."
A woman: "Who was in a tent now has a home. These protests are instrumental and misguided." A regional adviser: "Restoration stopped because the mayor Cialente has not yet signed the plans." 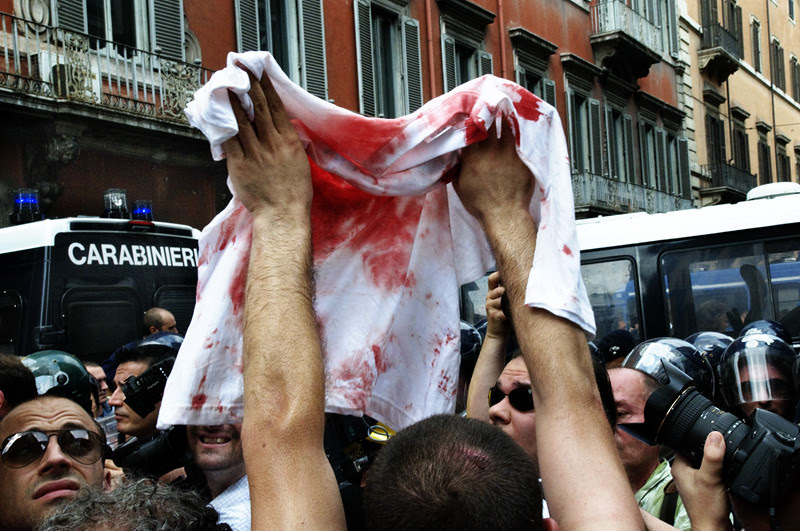