July 01, 2010
Stories and News No. 206
I read this morning - no more surprise... that the Berlusconi's People of Freedom are considering a modification to the Lodo Alfano immunity Law to make it retroactive for both Silvio and his ministers.
That will be an invincible shield against the enemies of democracy.
I am talking about a magic filter that will protect the good from the bad ones.
The new immunity law will be an insuperable secret weapon in the hands of the goodness that once and for all will defeat the evil empire.
Let’s see it in detail…
The Story:
Tremble, communist judges.
Surrender, partisan journalists.
Cry all of you envious of the people of absolute freedom.
The war is over, everything is accomplished.
The super Lodo Alfano is coming.
The prophecy is coming true: One Law to rule them all, One Law to find them, One Law to bring them all and in the darkness fuck them.
Indeed, even in sunlight, so nothing happens.
We are invincible, we are beautiful, full of pussy and you have lost.
Because we are not fools like Frodo.
We do not throw into the volcano such a weapon; this is not a fable.
A warhead like this will end any conflict between us.
You will see that you'll appreciate it too.
Aren’t you tired of being always speaking against Berlusconi and his companions?
Yet you still do manifestations, protests on the web, live demonstrations and various proclamations.
But what has changed so far?
Silvio has become even richer and you... you are still there to drool.
Many of you work for him, more or less indirectly.
Many of you write books, made films, eat and get money thanks to him.
For this this law will be more useful to you than us.
This is a perfect shield, impenetrable and especially eternal.
Yes, you read right.
Once the law will be approved, even the smallest slope related in some way to the prime minister and his ministers will be deleted.
We're not just talking about processes, of course.
Every bush, every reason to complain, past or present, will be erased.
The bad note on the register of minister Bondi that, during the Literature lessons, drew the snots on his companions’ heads, will instantly disappear.
Minister La Russa’s, who in high school was mocked for his prominent nose, will not wake anymore up every night with the Ignazio the nose cries, because his memory will be rewritten.
What about minister Bossi? Suddenly he will see the pursued degree hanging in the living room.
Minister Calderoli’s pimples that tormented him will disappear from childhood photo that he hides in the box under the bed.
Only the photos, everything else will remain.
That’s just to reassure the minister.
What about him?
Well, for Silvio a few things are left to do.
Once the Law will be retroactive, I wonder what the hell we're doing here… 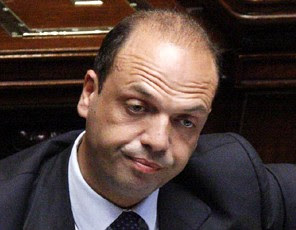