PDL is falling down and PD alternative is: too many immigrants in Italy

July 13, 2010
Stories and News No. 214
I think that recent days Berlusconi’s People of Freedom image has become shabby and shameful to the most strong of his supporters too.
He will never admit it in public and in the style of his loved leader he will point out all the usual plot of the communist judiciary.
However, I am convinced that within himself, perhaps in the evening when he’ll put the light off before going to sleep, will have a very clear perception of what kind of people he voted.
This morning I read about ten thousand pages of documents on a true lodge, a secret business committee created for rule the State, a sort of P3.
Through these investigations, after the name of the usual Denis Verdini, we have the other habitué Marcello Dell'Utri and the Economy Undersecretary Nicholas Cosentino.
While the news that Berlusconi has asked foreign ambassadors he met to bring beautiful girls in Italy makes the usual tour of the world, this is my question: if the PDL is literally falling down, what does Democratic Party?
The Story:
Once upon a time there was a country we can call Italy.
I could also say Spain; do not think I’m obsessed.
Indeed, I’d really prefer to speak about Spain, I would tell you about the Soccer Championship just won.
But try to understand me: I talk about what I care most.
In the country called Italy there was a government.
Maybe, you could say that is obvious, it’s normal that there is a government.
You are wrong.
I can assure you that there are countries where there is no government and politicians ever do what the fuck they want.
Speaking about the country named Italy its government had reached the game over.
Of course, a metaphor for metaphor, saying that the government had come with the shit up to his neck would be more fitting; however, you know how things work in the governments: at most they arrive to game over.
In deep shit there is always the country, never the government.
If you are familiar with the governments of countries, when one of them is game over, usually the adverse coalition rubs its hands and raises its voice, ready to take over the position of rivals.
Well, at the time of fatal impasse in the government, this was one of the ringing signals and especially alternative messages sent by the minority opposition:
In Italy there are too many immigrants 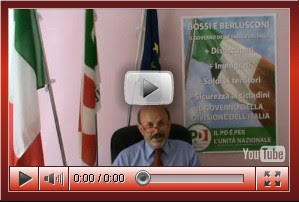 (Video by senator and Marche regional secretary Democratic Party Palmiro Ucchielli)
As if to say, the problem of government is not in the recipe. To win we just need to replace the chef.
To add a chair we’re always in time…
The News: PDL in disarray.
Stories and news: “invented” Stories, fruit of my imagination, inspired by “true” media News.
Share the post: