September 10, 2010
Stories and News No. 224
Last night Italian TV showed an interview with Giulio Andreotti.
At the request of the journalist on lawyer George Ambrosoli’s assassination, he replied: "This is difficult, I will not replace the police or courts. He was certainly a person who was looking for that."
Ambrosoli was killed in 1979 by a killer hired by Michele Sindona, the famous Sicilian banker felon which he was investigating.
The shameful comment by senator Andreotti received a lot of criticism and accusations making him release a weak excuse: "Sorry, I was misunderstood."
I take for example, for authority and intelligence, Umberto’s speech, youngest Ambrosoli’s son: "Andreotti is perfectly consistent with his history, with the process of Palermo, with the process for murder of my father. Everybody with this sentence will enrich his opinion on that story about those years and its protagonists. For the rest, anything else is superfluous."
That’s a perfect answer.
In my humble opinion, the problem is that we have not put to Andreotti the right questions.
Let’s not expect his leaving too with four ridiculous letters…
The Story:
First question:
Are you not ashamed to still sit in the Senate while in 2003 the courts have found you guilty of involvement in a conspiracy?
Second question:
What do you think before falling asleep after years of attending the worst boss of Cosa Nostra?
Third question:
Even the journalist Mino Pecorelli was looking for his death?
Fourth question:
When in May '92 Falcone and Borsellino were killed, are you sorry for their deaths or for not being elected President of the Republic?
Fifth question:
Why did you want General Carlo Alberto Dalla Chiesa’s return to Sicily?
Sixth question:
Was he looking for his death too?
Seventh question:
How can you consider yourself a christian with such a past behind?
Eighth question:
Observing today the decay of our country, do you feel a little guilty?
Ninth question:
Did you send to Michele Sindona the packet of sugar with cyanide? Was he looking for his death?
Tenth question:
Now, the end is near, Senator. Confess before it's too late: would you tell us the truth about the history of Italy?
Well, it seems he was looking for that… 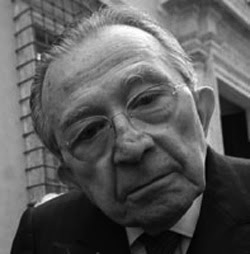 The News: Andreotti: “Ambrosoli was looking for his death.”
Stories and news: “invented” Stories, fruit of my imagination, inspired by “true” media News.