Berlusconi and 20 deputies history of sex

September 15, 2010
Stories and News No. 227
If we did not know that we are talking about the government of a country that is officially part of the G8 and participates in all meetings of the most powerful nations of the world, we should simply sit on the couch and watch the show.
What kind of show?
A farce, a ridiculous farce.
How can you not laugh, only a day after the announcement by the newspapers of a so-called good governance accountability group to help Berlusconi, reading that this group is not a group and that it’s soon disappearing?
Obviously there's a way: reminding us that we are talking about the government of a country that is officially part of the G8 and participates in all meetings of the most powerful nations of the world…
For my part, this story of the group seems to me obscure and I felt again the need to consult the famous American sexologist Lisa Pointgee, an ordinary presence in my blog:
The Story:
A: Dr. Pointgee, I cannot tell you how happy I am to have you back here!
L: Well, don’t tell.
A: You’re the usual companionable…
L: What?
A: Nothing, nothing. I know… let’s be professional.
L: Do we want to get the point?
A: Okay. Have you heard of Berlusconi and the 20 deputies group leaded by Francesco Nucara?
L: Yes. And of course I have a theory about it.
A: Do not tell me. Is that another history of sex?
L: Sure, a textbook case.
A: Enlighten me.
L: Well, I cannot because all must be dark and it’s not a metaphor.
A: In what sense?
L: You see, as I said earlier, this story of Berlusconi and the Nucara’s group is a textbook case. We call it Orgiae responsabilitatis, the orgy of accountability.
A: If at school I had done my homeworks using your Latin I would never be graduated…
W: Pardon?
A: Nothing, my things…
L: I was speaking about the orgy of accountability. You know what an orgy is, right?
A: Yeah. That’s when a group of people fuc…
L: Do not be vulgar. The term used by sexologists is collective fornication.
A: Sure, that’s when many people fuc…
L: Ok, I see you’ve understood! Let’s go on. We have a collective fornication of accountability when a dominant subject - the so-called king of the orgy, has penetrative priority over the group, which is passive to him.
A: Basically, the king fuc…
L: Listen, could you keep these rude interpretations in your mouth? However, that is the effect.
A: Well, let's see if I have correctly understood: Berlusconi is obviously the dominant subject.
L: Exactly.
A: Nucara’s friends are the passive group. But the newspapers said that the group is disappearing…
L: You don’t understand. This is an accountability orgy: the dominant subject must have a group to dominate and what does Nucara?
A: What?
L: He turns off the light.
A: Turns off the light? And if Berlusconi turns it on?
L: If so he will see that in reality there is no group and the person who is sodomizing is one.
A: Wow, that’s a scoop. Who’s?
L: Well, among his ministers and secretaries you may find a lot ready to take their pants off… 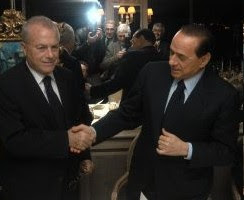 The News: There is no 20 group of deputies for Berlusconi.
Stories and news: “invented” Stories, fruit of my imagination, inspired by “true” media News.