September 30, 2010
Stories and News No. 238
It was predictable: the People of Freedom voted to trust their own sovereign.
All the people: faithful enemies and adoring servants, complicit debtors and blackmailers, and especially grateful and pandering souls.
This is the people of freedom, where everyone is free to choose how to worship the divine Silvio.
That is nothing new under the Italic sun of the last fifteen years.
In my humble opinion, the most interesting facts are the points that Berlusconi told.
In other words, what this shaky confidence is based on.
Berlusconi has listed five points.
Well, yet another innovation of this blog, I shall apply to them a prototype device, that is very advanced in detecting the true meaning of Italian Prime Minister’s words.
This is a kind of translator, which - unlike traditional media – does not just report the speeches of politicians, but it raises the real meaning, synthesizing the essential message.
How does it work?
Simple: It just remembers who is the speaker and especially who he is talking to…
The Story:
The five points:
First: the Federalism
Berlusconi: "This is a pillar of the government program. It will be the hinge to unify the country. No one must fear that it could produce a further divide between North and South. It will ensure transparency and will give birth to a new Italy with a new national deal."
Translator: "Bossi, you and the Northern League, vote for me and you will continue to do everything you whish."
Second: the Tax reform.
Berlusconi: "The government's objective is to reduce the tax oppression and the large jungle clearing the tax system, while ensuring growth and severity of the accounts of the state, all without creating deficits. The priorities are family, job and research."
Translator: "Dear rich, businessmen and bankers, in short, people with money: make vote your politics friends. You won’t miss my gifts, support and concessions."
Third: the Justice.
Berlusconi: "Let’s stop with the political use of justice, it is time to reform, starting from that Constitutional one in the CSM and the separation of careers judges. Soon there will be special plan for pending civil cases."
Translator: "Friends and fellow investigated, with charges and condemned politicians: give me your vote and let’s together stop with these damn trials."
Fourth: the Security
Berlusconi: "You all know the successes made by the government in the fight against crime and I have to praise the work of all law enforcement. Finally there is a great team called the State. Very well was the action on immigration with illegal landings reduced by 88%."
Translator: "All of you who always ride on the mechanism of fear of Islamic terrorism, immigrant rapists and thieves gypsies, vote yes. We must remain united on this strategy. You know better than me that this is the only thing which allows us to win every election."
Fifth: the South Italy
Berlusconi: "More infrastructures: these are the main axes which government action moves on. In the next years, with investments of 21 billion euros, the interventions on the South will be tripled, reaching some important results in 2013 as the completion of the Salerno-Reggio Calabria highway. Before the end of December the project of the bridge over the Sicily Messina Strait will be ready."
Translator: "This time I really talk to everyone, so you're almost in every part of the Parliament. Mafia friends, I have never forgotten you. Please vote for me, because we still have much to build together…" 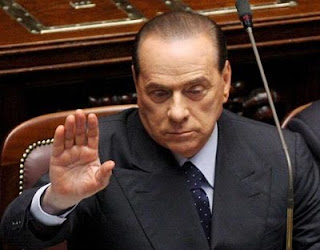