September 28, 2010
Stories and News No. 236
"You see too what is the situation of these days. We are facing very important must-pass obstacles in everyone's interest. I am faced with a document that will get the majority vote of the parliament in order to move forward…"
These are some of the things that Silvio Berlusconi said by phone to his friend Pierino Gelmini, on the party of the drug abuse rehabilitation centre Comunità Incontro (Community Encounter), where the undersecretary of Prime Minister Carlo Giovanardi was awarded with the "Madonna of the smile" prize.
Apart from the only logical explanation for such recognition – if the Madonna thinks of Giovanardi, she can only laugh… - I have another scoop.
I could write a post on the meaning of coherence in President of Chamber of Deputies Gianfranco Fini and his friends voting the confidence to a person like Silvio, after having finally started to separate from him.
However, as I already said in the past, if they were coherent they would never have been allied with Berlusconi.
From the beginning, and not only when the share of the Prime Minister has begun to decline...
But let’s back to the scoop I am going to publish.
The following are video and text of tomorrow Silvio’s speech to Italian Chamber of deputies.
It seems like a madcap farce, isn’t it?
Anyway, what is not in this story?
The Story:
Mariastella Gelmini: (entering with a scream of terror) Silvio, they want to kill you! You are accountable for the decline of the country.
Silvio: I am accountable for the decline?
Mara Carfagna: Silvio, persuade the Parliament with one of your usual talk.
Silvio: Very well, I will speak with the parliament, but don't leave me alone… Stay behind me…
(He moves but the sudden screams make him hurry back) Ah, no… my allies are ignorant… they want the money…
(He repeats the action and again downgrades) I know what to do! The people of freedom are mine… God gave me a light: Eureka! Eureka! Who cares! I have them in my hands… If I entertain them, they are mine…
(He reaches the place, people still cry and he tells a joke about his former ally Gianfranco Fini. Some laugh, but others continue to scream)
Silvio: Stupid… Ignoble mob! Is this the reward for the sacrifices I made for you? Retreat, show to be men and tomorrow Italy will reborn more beautiful and superb than before…
People of Freedom: Bravo!
Silvio: Thank you.
(To Gelmini and Carfagna) They liked that word… before. The people of freedom, when hear a difficult word, love you… Now again: more beautiful and superb than before.
People of Freedom: Bravo!
Silvio: (faster, trying to surprise them) more beautiful and superb than before…
People of Freedom: Bravo!
Silvio: More beautiful… thank you!
People of Freedom: Bravo!
Silvio: …thank you!
People of Freedom: Bravo!
Silvio: (making the gesture to say the word before, but he did not say it)
People of Freedom: Bravo!
Silvio: Bravo!
People of Freedom: Thank you!
Silvio: Do you see how my people are? When they used to say bravo, even if you didn’t anything, you're always good…
Free adaptation of "Nerone" (Satire on Roman Emperor Nero), by Ettore Petrolini. 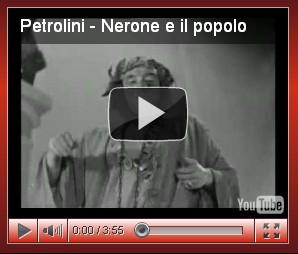