September 03, 2010
Stories and News No. 219
What I am about to write, or pull out of the belly, is something I've often thought this summer, every time I read the news of the day.
Maybe that’s because it comes from a feeling at the basis of the reasons that led me open this Blog.
The feeling of seeing a country split in half.
Indeed, half is not the right size.
Let's say in two parts.
In the smaller people are mainly speaking, most of the time spitting and drooling without paying any attention to the message of others.
Since fifteen years the main arguments are the interests of a damned dwarf.
I say damned him and especially those who allowed him to buy our land.
And the words flow, short process, long prescription, gag and ad personam laws, immunity bills, communist judges and so on.
Like the fundamental dilemmas: justicialism or guaranteed? Berlusconism or anti-Berlusconism? Elections or technical Government?
For good or bad luck, like many in this beloved Italy, every day I live and observe somewhere else.
There, citizens are still sleeping afraid of the earthquake, people continue to die at work, a young man to four is unemployed and for many, too many, have so much desperation that a couple want to sell kidneys and eggs for pay the mortgage on the house.
And think that those who just talk in the first part are paid by the poor in the second…
The Story:
Once upon a time there was a ship.
On the ship there was a democratically elected captain.
The captain, like all the masters of modern democratic ship, had a crew.
There were those who served him faithfully, prone and creeping.
There were those who served him unfaithfully, argumentative and grumbling.
And there were those who served him secretly, critical but always in moderation.
That was a typical ship whose captain is the only thing that holds together his crew.
In the ship's hold were the rowers.
Slaves, destitute, wretched, heretic and outcast persons, all chained to the oars toiling every day to allow the ship’s travel.
Being honest, they were not chained.
The weirdest thing was that the chains were only metaphorical.
The rowers choose to remain there, to sacrifice their life.
For what, then? To enable the crew to serve the captain.
Just to summarize.
And why did they accept that?
That’s simple or maybe not.
All, all those who broke their arms to paddle kept their gaze fixed on a large screen.
The screen ever showed the same film, the story of a dream, a dream in which each one of them was the protagonist.
And in that dream every rower was finally free.
However, free to serve the captain, but staying upstairs.
You know, upstairs there were a lot of things that were not below: the escorts, the villas, the swimming pools, the cars and the massages, all with the escorts too.
Each rower was hypnotized by that mirage and accepted every humiliation to keep on dreaming of the Eden above.
The ship grooved the waves so long, until the day arrived that began to slow.
The captain did not notice it.
He was so low that he could not see the sea and could not comprehend the ship’s speed.
Let us say that he saw nothing beyond himself.
The crew had eyes only for the captain, who saw only himself.
Thus, the ship slowed down, slowed and slowed.
And it stopped.
Even then the captain did not see anything.
In that moment also the crew realized that the captain did not rub anything if the ship was moving or not.
A ship which does not move is condemned to death.
In the sea everybody knows, even the corals, which are always stationary.
Thus, a crew member was raffled to go and see what happened below.
The chosen man opened a trap door, stuck his head in and gasped.
In that exact instant he realized that the time for talking was over.
Captain and crew had only two choices: death or rowing.
And the poor who were below?
I don’t know what happened to them.
Some say that they died of fatigue.
I like to think that they broke their balls, destroyed the screen and went away on their own, to work for their dreams... 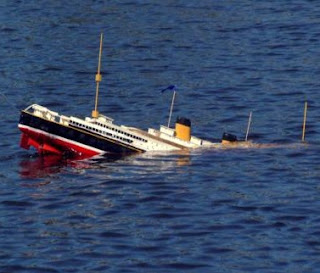