September 21, 2010
Stories and News No. 231
"Gay adoptions cause more children trafficking".
Tuesday's Quiz: Who said this crap?
A: The same who said that Stefano Cucchi died because was addict and anorexic.
B: The man who said that in Italy a sick child is treated while in Netherlands is killed.
C: The author of Stories of extraordinary injustice, an ‘indispensable’ essay denouncing the ‘crimes’ of magistrates against the most honest party in Italian history: the Italian Christian Democrats.
And who’s except the Secretary to the Prime Minister Berlusconi, Mr. Carlo Giovanardi?
Do you think I was hurry defining his words a crap?
Indeed Giovanardi gives also 'data': "Where gay adoptions are allowed, as in the U.S. and Brazil, this phenomenon of child trafficking has is very increased."
So, I have not even started the post that I am full of doubts.
Was he right or not?
Has what he says a sense?
Okay, I accept the challenge.
If his claim has is minimal logical, I will find it.
And of course I will rely on the only instrument that I immodestly enjoy to use:
The Story:
This is an old story that in some traditions handed down orally.
Not in Italy, at least not officially.
But in my country we lend ear to what most normal people say, considering the daily reality for what it is, and not listening the paid by us idiots telling craps, we may have a chance to hear stories like this.
On day Aristotle was approached by a young pupil.
The latter had a grandmother, who, before her last breath, uttered this sentence: Carlo Giovanardi, gay adoptions and child trafficking.
Knowing that his master was a great logician, probably the first in history, the boy went to him and asked the meaning of those words.
"What do you mean by gay?" Aristotle rightly asked.
"Grandpa," the boy mocked, "You're too old, you know? Gay means homosexual!"
"And why don’t say homosexual?!" The famous philosopher said irritated.
The young man shouted and stepped back.
He knew that when Aristotle was irritated he used to spit.
"Anyway," the brilliant thinker said reaching the blackboard and start writing the mysterious phrase, "Let’s see what could be the meaning of this prophecy..."
After several mumble, the master said: "From the end: child trafficking is defined as the recruitment, transportation, transfer, harbouring, or receipt of children for the purpose of exploitation. That’s very horrible, my friend."
"Yes."
"Let’s go forward: the gay adoptions are the adoptions of children by same-sex couples. The debate on it is very hot. For my part I do not have a definite opinion. Do you?"
"My father abused me since I was minor and my mother drank from morning to evening. I would have preferred even that my parents voted Berlusconi and I said everything with that. To me, gay or not, if they just had not hurt me would have been much..."
"Who is Berlusconi?"
"No, that’s another Grandma's prophecy..."
"I see. However, we are the last element, the most singular: Carlo Giovanardi. Who is he? Did your grandmother say anything? "
"No…"
Aristotle began to mull over and after a few minutes the young man cleared his voice loudly to attract the attention of the philosopher.
The last time he had turned his back to reflect remained so for almost two hours.
"Eureka!" Aristotle finally screamed. "In this sentence - Carlo Giovanardi, gay adoptions and trafficking of children, the three elements have only one link from the logical, semantic or any other reasonable point of view, that gives meaning to everything."
"What is it?"
"Gay adoptions increase child trafficking."
"Really?"
"Yes, indeed, in this particular case, children do not even wait for someone to take them: they flee the house alone; but only in one eventuality."
"Which one?"
"In the only able to make the phrase your grandmother coherent: if one of the gay parents is Carlo Giovanardi..." 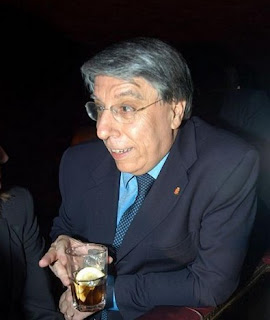 The News: Giovanardi against gay adoptions.
Stories and news: “invented” Stories, fruit of my imagination, inspired by “true” media News.