September 29, 2010
Stories and News No. 237
It's true that reality almost always exceeds the imagination.
I ever thought this.
For this reason, I consider the media news an extremely fertile source from which drawing to invent my own stories.
As many in Italy know, the Minister for Reforms to federalism, Mr. Umberto Bossi, referring to citizens of the capital of the Italian Republic - which he has sworn allegiance to, said this: "These Romans are pigs…"
The not so original change of the true meaning of the abbreviation SPQR has obviously shocked the hearts of many.
That was just an ironic joke.
This is the way how Berlusconi called the offence, I repeat, by the Minister for Reforms to federalism.
Yesterday Mr. Bossi, speaking to Radio Padania, added: "We expect to be respected and not stolen. If they (the Romans) could, they would steal even our sidewalks…"
Eh, you all know: everybody in the world envies the northern Italy sidewalks...
Now, the sardonic fate made that at north of Umberto Bossi there is Switzerland.
However, the news I am going to quote is not about the Swiss country, but particularly Canton of Ticino, part of the so-called Italian Switzerland, which makes everything even more grotesque.
In fact I read today that in Canton of Ticino there is an advertising campaign which - drawing them in the form of mice, indicates foreigners as responsible for all problems and, in particular, accuses people from Northern Italy towns like Milan, Como, Varese and Novara of stealing jobs to pure Ticino citizens.
How can I not write something about?
As they say, that is a perfect assist…
The Story:
Once upon a time there were a father, a mother and a child.
The three were very happy that day.
The reason of it I will say at the end.
This family lived in a building of eight floors.
They had the misfortune to live on the ground one.
And most importantly, they were born Roma.
They were not unlucky just because they were Roma.
They were unfortunate of being born Roma and living at the first floor of that building.
One evening, the boy had asked his father why the neighbors upstairs always treated them badly.
"Because they say we are dirty and stink," the father replied.
"But we must understand them, they have their problems too…" he added later.
"What problems?" the child asked.
"You see, they are illegal immigrants and who live upstairs accuse them of being in the building only to steal and sell drugs."
"And who are these others?"
"They are people like us and they also don’t live so well ..."
"Why?"
"Because they are Palestinians and the persons who live at the up floor, the Israelis, argue that their intent is to occupy their home…"
"Really?"
"Sure, but don’t think that the Israelis sleep soundly. On the floor above there are the Anti Zionists, who see the Israelis as greedy and only attached to the money. "
"What an ugly building, Dad…"
"Ah, but you have not heard anything yet. Over the Anti Zionists, on the sixth floor, there are the Padani. "
"Who are they?"
"They are people from northern Italy."
"They are Italians, right?"
"No, they call themselves Padani and believe that all who live below are inferior, with no exceptions."
"Who live above them?"
"This is funny, my son: the Swiss, but not all Swiss, the Italian Swiss. And the Italian Swiss accuse the Padani of stealing their job. "
"Wow. And who lives on the top floor? "
"Nobody knows, my dear. And, since the nature of the building, no one has the courage to go knock on that door…"
As you can see, for the Roma family life in such a palace was not easy, but finally a light appeared at the end of the tunnel.
For them it was a great day, that.
The three called it the time of revenge.
Nothing extraordinary, telling the truth.
They had just learned that a family had purchased the basement beneath them.
To know they can get someone to let off steam was a wonderful joy… 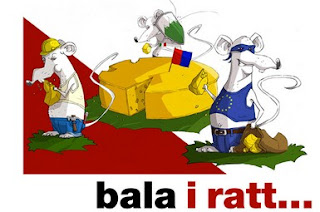 The News: Mysterious campaign against foreigners.
Stories and news: “invented” Stories, fruit of my imagination, inspired by “true” media News.