Pisacane School immigrant children are not Italians: racism? No, idiocy

September 17, 2010
Stories and News No. 229
"Although these children were born in Italy is not wrong to consider them foreign. That’s a master but also cultural issue…"
These are words and music by Laura Marsilio, PdL city and school educational policies councilor of Rome.
I was undecided on this post and I still am.
My doubts are in choosing the best way to comment on the striking out by the councilor.
In the past, when I was a little feel-good, I would have defined her statement as ignorant.
I'm not a feel-good and tolerant guy.
I’m not ever been the latter.
That’s why the right and often even to the left don’t like what I say.
I have never tolerated the ignorance and especially today I do not tolerate stupidity.
That especially is when it has the power to take decisions on my children’s life.
I hope it is clear to you that come in this blog that I am won’t ever tell you lies,
as we are all equal.
I’m not equal to Ministers Calderoli or Bondi.
The fact is that I won’t’ stay here telling you that children of immigrants born in Italy are Italians.
Maybe they are or maybe not.
Maybe not, I hope for them.
I unfortunately am.
Luckily, I am part of this Italy, not Dante Alighieri, Leonardo da Vinci and Galileo Galilei land.
Italy which today I belong to has leaders like Berlusconi, Bossi, Gasparri and that Laura Marsilio, if we just refer to the city of Rome.
It's a cultural issue, she says.
Hey, People of Freedom, Berlusconi’s friends: what the hell do you know about culture issue?!
The Story:
Once upon a time there was a land that we can, indeed, we inevitably must call Italy.
In the land we inevitably must call Italy there was a school.
The Pisacane School.
In the Pisacane School there was a class.
In the class there were 30 students.
29 of them were born in Italy sons of immigrants.
One was the son of Italians and born in Italy.
In a few words, he was pure blood.
His name was Benito, no, Romano…, indeed, Silvio.
Yes, Silvio, the prototype of the average Italian man of the third millennium.
The born in Italy sons of immigrants – called foreigners by the realist people and the new Italian by the feel-good ones - were Ousmane, Traian, Fatima, etc.., not Pasquale, Gennaro and Antonio.
Do you really want to compare them?
The first day of school, the teacher, Mrs. Marsilio, came into the class and was horrified.
"It's aberrant," the woman thought watching that sea of brown skins, curly hairs and almond eyes. "A class with only foreigners is aberrant, because integration means exchange and not only isolation…"
However, suddenly a light appeared from the end of the nightmare tunnel while she saw a face covered with a soothing pale skin in the last desk in the middle of the room.
"Y-You…" she excited said pointing him with a trembling finger. "W-What’s your name?"
"Mohamed," the near classmate answered.
"Not you!" She screamed with a shrill little voice. "The one next to you!"
"Silvio…" he shyly said.
The teacher had almost an orgasm for the joy.
"Silvio!" She ecstatically thought. "Maybe all is not lost. The integration is still possible…"
"Dear," the teacher said with a sweet voice, unable to take her eyes off him, "come here to explain to your foreigners fellows what Italy is, what to be Italians means and what our culture is!"
Although he was not so happy for the invite, Silvio accepted the task.
That morning his parents had repeated many times that it’s important to make a good impression on the teacher since the beginning.
So cleared his throat and spoke.
He spoke of the Italy he knew.
He spoke of what he had heard about Italians by his parents, relatives and neighbors.
He talked about the soccer player Antonio Cassano, who would have been useful to the national team, because maybe he is not a phenomenon but he certainly would have played better than Cannavaro and others.
He spoke of the Big Brother and other reality shows new seasons that he was waiting to watch.
He spoke of the Sanremo Festival and that he still wanted Paolo Bonolis as host.
He spoke of Miss Italia and he agreed she was beautiful, but for him Elisabetta Canalis was hotter.
He particularly spoke of X Factor and how he didn’t like Anna Tatangelo.
Even she was a very beautiful girl.
And the teacher relaxed.
Long live Italy. 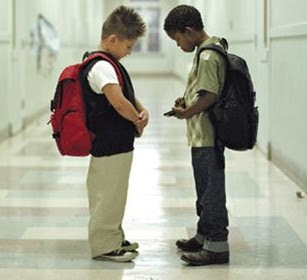 The News: Immigrant born in Italy children are not Italians.
Stories and news: “invented” Stories, fruit of my imagination, inspired by “true” media News.