September 16, 2010
Stories and News No. 228
First of all I want to point out something that maybe deserved a single post:
Fascists? Italian fascists, do you hear me? Right people, are you listening? I’m not talking to those new moderate friends of immigrants-that-early-will-vote. Indeed, you too. I’m referring to you all, those of honor, homeland and family: how can you accept a government that lets its fellow citizens shot by 'cruel Saracens' without moving a finger?
Ah, I know; if the Left had got the power, it would have been different, isn’t it?
Luckily we have Right leaders.
Right…
What kind of Right are you?!
Sure you're not Sarkozy Right.
That's right 'I like'.
Don’t get me wrong, I say that I like because it makes me angry and provokes my sincere indignation.
On the contrary, Berlusconi, La Russa and Gasparri Right causes only one thing to those who have a minimum maturity and above all dignity, whether a supporter of honor, homeland and family or not: shame.
The anger I feel is for those intelligent persons who voted for them.
Anyway, let’s back to Sarkozy: "Roma should be sent to Luxembourg".
Oh, this is the way a fascist leader responds to European Commission Vice President and Justice Chief Viviane Reding, guilty of daring to criticize the recent French expulsion of Roma.
And what does Berlusconi?
What does the Italian Right leader?
He does what he’s ever able to do: he copies…
The Story:
Once upon a time there was a school class.
In the class there were two students.
One was called Sarko and the other Berlo.
Some of you might ask: “But what kind of names are these?!”
Well, you have not heard anything.
The two were together at the same desk, at the first one.
The fact was that they were one in two.
I mean one of the students.
I could say one brain too, being honest, but you’ll better see going forward.
Low as they were, at the second desk they would have been invisible to the teacher.
That morning the latter decided to propose to the class a lesson on the Roma people history.
A people with ancient origins and that over the centuries has had to endure slavery, deportation and extermination.
As soon as the teacher announced the theme of the lesson, Sarko raised his right hand.
"Speak," she invited him.
"Mrs. Teacher," he said, "Roma people are dirty and they steal."
The woman was not surprised by the student and after an overview of his companions she made this fundamental question: "Does anyone think like Sarko?"
No one spoke.
However, before the teacher could replicate the observation of the pupil, the classmate of the latter raised his left hand and then frowned as if trying to remember something important, to quickly pull it down and on the right one.
"Please," she invited him.
"Teacher," Berlo said smiling, "Rum people are dirty. And ... and yes, they steal."
Inevitably, all the comrades laughed, even Sarko.
Berlo also laughed, unaware of what was the real reason and believed this was due to his alleged overwhelming sympathy.
Only the teacher did not laugh.
Perhaps that happened because she was of Jewish origin.
Or maybe because she knew that Roma or rum, the ignorant are always dangerous... 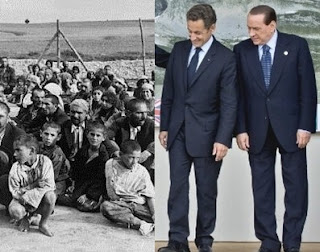 The News: Sarkozy suggests Roma should be sent to Luxembourg.
Stories and news: “invented” Stories, fruit of my imagination, inspired by “true” media News.