September 27, 2010
Stories and News No. 235
When I read it I thought it was a joke and I still have doubts whether it is a true story or not.
Apparently, the UN is about to appoint an ambassador for relations with the aliens.
The person that seems to be chosen is the Malaysian astrophysicist Mazlan Binti Othman, director of the United Nations Office for Outer Space Affairs, UNOOSA.
Well, it is a strange fact, but never as Berlusconi's reaction to the striking United Nations initiative.
You may not believe it, but the Italian Prime Minister was surprised that he was still not consulted in the choice of the ambassador.
You see, a man like him, is ever surrounded by people who are alien to all that, on the contrary, should be unquestionable: democracy, equality before the law and respect for human rights, just to name three at random.
So, as soon as he read the news, Silvio has made a meeting and after a long huddle he proposed the perfect candidate for this delicate role.
The latter is the worthy representative of Italian recent politics in dealing with people coming from afar.
And who is far, far than the aliens?
Scoop of this blog, here's the first interview to the Italian nominee: Mario Borghezio.
The Story:
Blog: Mr. Borghezio, good morning.
MB: Good morning.
Blog: What do you think of this UN embassy on aliens?
MB: That’s an act of sheer stupidity and vile and insidious allegiance with Islamic invasion.
Blog: Islamic…? How do you know if aliens are Muslims? We don’t know them…
MB: They’re not Catholic, so they are necessarily Islamic.
Blog: Yes… listen, as a possible ambassador to the UN for the relationship with the aliens, what policies do you provides to welcome them to our planet?
MB: Welcome? We’ll give to the bastard illegal immigrants thousand and thousand kick ass.
Blog: Illegal immigrants?
MB: Sure, they’re not Padani. As I said time ago, Padania is a political, cultural and economic well-known in the world country and, I now add, famous in the whole universe; although the ragged political class of the South pretends to be unaware, while to us the South exists only as a ball and chain, which we painfully bring since 150 years.
Blog: So you plan to implement an expulsive strategy against aliens?
MB: Expulsive?! These nasty barbs, these puppets with the cloak, we take them by the beard and drove them away kicking their ass.
Blog: Aliens? Aliens with beard and cloak? Does your Party have any exclusive information on extraterrestrials? I was thinking it was an experimental program. We have no idea what kind of physical structure these creatures have…
MB: Maybe. I only know that the first Italy gold medals at last Olympics games were awarded to North athletes this shows the ethnic superiority of Padani.
Blog: Last question: what contribution do you think the aliens will give to our community?
MB: What contribution?! Maybe they want to say something about the garbage in Naples too. It’s true that in Padania we have a simple solution: it would be enough to give the Campania and the South to the Crown of Spain: they already had the Kingdom of the Two Sicilies! We are not fond of the Naples rubbish! Let someone else take it!
PS: Maybe this is not true and all is completely invented. Unluckily one thing is certain: every day this man sit in the European Parliament… 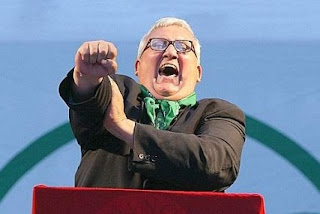 The News: UN plan for 'alien ambassador' a case of science fiction?
Stories and news: “invented” Stories, fruit of my imagination, inspired by “true” media News.