Fazio and Saviano, come away from Rai: less money, more freedom and consistency

October 19, 2010
Stories and News No. 251
I read this morning of yet another controversy around an Italian TV show, at least considering the anticipations, promises crackling and predictably uncomfortable for RAI managers - especially of those who composed it, exploits.
This time we are talking about Vieni via con me (Come away with me), a four episodes series hosted by Fabio Fazio, with Roberto Saviano as regular guest star.
I just wrote and I will not bore you coming back on the precious, indeed, the decisive contribution of marketing that more or less censorship attempts offer to TV heroes.
If this were not enough, it is sufficient that La Repubblica newspaper published an interview with Saviano where he declares that RAI fears what he and Fazio will tell, to attract the attention of the large public.
In particular, this hot series of preliminaries to the audience record orgasm regards the fees of some guests of the first episode, including Roberto Benigni, considered too high by RAI bosses.
Anyway, I understand and accept everything.
Well, I do not understand everything at all, I have my limits and I assure you that are huge.
I say everything in the sense of the rules of the game, indeed, of its parts.
On the one hand there are those who are forced to raise their voice and put spokes in the wheels.
It is inherent in the character, written and scripted for that reason.
On the second, we have the brave and enlightened artists, personifications of the two-dimensional television resistance, who must also demonstrate to fight hard achieving their goal.
Which goal? To be on the air?
No, that is the minimum.
The real goal is the same that their detractors take care of: the tv share.
However, the point of this post is another one: no one forces anyone to go on TV.
In RAI on any other network.
I thought before Raiperunanotte and I think even more so after what has been an extraordinary prove.
Who has the ways and enough popularity may offer good alternative information with great audience outside TV
Surely they will earn far less money.
But freedom and above all the consistency that they would keep intact are priceless...
The Story:
Dear Fazio, Saviano, Benigni, Paolo Rossi, etc.,
Come away with me…
Not me, with us.
We are many here, more than you can imagine.
Where?
Come away from Rai to go in Mediaset?
I said come away, not move in the next room.
A room of the same building, being honest.
Come away to La7?
No, you do not see the point.
With all due respect… well, sympathy for La7, when I say come way from what infected today TV and maybe of yesterday.
It is a bad disease and we all well know it.
The symptoms are now common signs: compromises to accept and speechs to adapt, controlled scripts to follow and timetable to rispect, network directors to please and commercial spots to support, scheduling to organize and - let's face it, giant toads to swallow.
There is only one cure, but it has a price.
A high price, I see.
There is nothing to pay, but when you earn much less, that is as if you were to pay something, right?
However, you can afford this sacrifice, I know and you know too.
It takes courage.
Yes, I know that you are already those brave.
What I ask you - is it not just me, is to be a bit more proud.
Trust me.
There is a planet that is called not by chance world wide web.
It is open to all and to all offers free listening.
Sometimes it gives to a fool like myself, let alone stars like you.
Come away with us.
You will see that it will be very hard to stop you.
Above all, no one will stain the purity of your words with dirty of your fees... 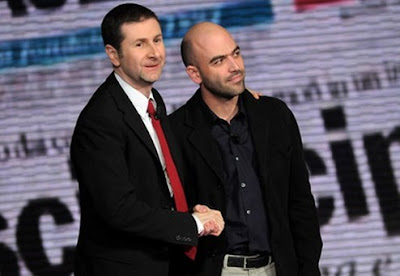