October 07, 2010
Stories and News No. 243
I read just now that the editor of Il Giornale, Alessandro Sallusti, and his deputy Nicola Porro are under investigation by Naples prosecutors about alleged threats to the president of Confindustria (the Italian employers' federation) Emma Marcegaglia. Apparently, she would have deserved this treatment because of some of her recent criticism on Silvio Berlusconi government (not forgetting that Italian Premier’s family owns the investigated newspaper).
Of course, everything depends on what you mean by family.
In general, when you dare to criticize the family, the family replies.
What do you expect? Hugs and kisses?
But that is another story, let’s return to the actual post.
I also learned that the investigation conducted by prosecutors Vincenzo Piscitelli and Henry John Woodcock, has led them to order a search in the offices of the newspaper,
in particular looking for evidence of a dossier on Marcegaglia by Sallusti and Porro.
I cannot believe it.
Come on…
After what they made to Dino Boffo and Gianfranco Fini, do you really think they want to look into the private life of the president of Confindustria?
The problem is that I imagine them, because to imagine is my job, but the scene that comes to mind is too absurd.
After all, we are talking about important journalists, two reporters of one of the most widely read Italian newspapers.
Since if that was true, it might have happened something like this…
The Story:
It is morning, like many others. We are in an office room. There is a desk covered with newspapers, magazines and various files, as well as a PC monitor on. The desk divides two men, who are going to share some important information:
Director: So, what have you found on the lady?
Vice: Not much.
Director: What does that mean?
Deputy: Well, as usual. We have to work on it…
Director: Of course we have to work on it! What does the owner pay us for?
Vice: I know, I know.
Director: Okay. Tell me what have you got.
Vice: I start from the beginning. As you know, our friend was well born. The dad's company works in the steel, as well as in tourism and in real estate. They had legal problems in 2008 for a history of bribes and still have the Swiss on their neck…
Director: This is the father. Let’s talk about her.
Vice: She had a degree in Business Administration from Bocconi University in '89, with honors too.
Director: She’s a swot.
Deputy: Yeah. She also attended a Master in the United States, where she lived eight months.
Director: Oh, that’s interesting. Did you find something about that period? The usual things… sex, drugs…
Vice: Hey, we are not always so lucky. I didn’t find anything on the American months.
Director: Go on.
Deputy: There is not much more. In later years the lady was divided between the family business and Confindustria, where, before she became president, holds various other positions. In 2001 she married and subsequently had a daughter…
Director: Oh, yes. What have we here?
Vice: Nothing.
Director: Nothing at all?
Vice: Zero.
Director: I see. Then, as we said before, we have to work on it.
Vice: Do we start with the classic?
Director: No. No homosexuality… We already used and it was counterproductive.
Vice: But we fired our last victim…
Director: Yes, but I don’t think that it will work with a woman.
Vice: What about drugs?
Director: No… I don’t think it will work. Nobody would believe it, it’s not in the character.
Vice: This is really tough, don’t you agree? Do we build a bluff?
Director: You know what I think: the bluff, if you play well, gets always good results, but we still need something to start…
Vice: Wait a minute. I just got a cell message from my informant…
After ten seconds:
Director: What does he say?
Vice: We have something to start!
Director: What is this?
Vice: You won’t believe it: the lady is allergic to cats!
Director: Oh, great. Now we can start doing our job… 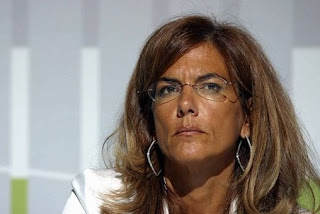