October 22, 2010
Stories and News No. 254
When the going gets tough the tough get going, the legendary John Belushi said in Animal House.
And what happen when the garbage problem in Naples has gotten out of hand, as the premier Berlusconi said?
Simple, he enters the scene and solves everything.
Well, perhaps this is hard also for a Silvio’s adorer.
Let’s just say that he enters the scene.
The Italian hero of the third millennium, after the Council of Ministers, convened a summit with exception members: the Interior Minister Roberto Maroni, the Environment Minister Prestigiacomo, the Head of Civil Protection Bertolaso, the trustful Gianni Letta, the President of Campania Region Caldoro and Economy Minister Tremonti.
Silvio has already said that to end the civil war that is gripping the province of Naples he propose a drastic solution.
I read that it consists of some economic incentives.
Of course, when we have to pay money is not always easy to agree.
Here is the more or less real chronicle of the crucial meeting…
The Story:
Berlusconi sits at the head of an elegant rectangular table, next to Gianni Letta, on a visibly lower chair.
Chair...
Let's face it: it is a stool.
To the right of the Prime Minister there are Bertolaso and Caldoro and in front of them Prestigiacomo and Maroni.
At the opposite of the table there is Tremonti.
Letta, after a hint by Silvio, starts to speak: "So, without any unnecessary preamble, you all know that the situation in Campania is worrying..."
Then crossed for a moment the look of Berlusconi and adds: "Let's say that the situation has gotten out of hand…"
Minister Maroni tries to express his opinion: "Well, we really are acting..."
"Those scoundrels of Anno Zero!" Silvio interrupts him slamming his hand on the table. "Did you watch them last night? Tell me if this is not a criminal use of television! And RAI General Director Masi? What the hell is that Masi doing, there? Now he woke up! He should have done something before..."
"Yes…" Letta comments, trying to bring the discussion to the point. "Returning to the rubbish problem, before the EU intervention, we must act in a decisive…"
"Regarding this," Tremonti says, "My ministry considers preferable to avoid European Union…"
"And those of Report?" Berlusconi screams, completely ignoring Tremonti. "Do you think is a normal thing that these people should stick their nose into the private life of the Prime Minister? I am rich, what’s the problem? I'm rich and I buy the houses where and how I want! Why do I have to account to these people? They’re jealous, that's what they are..."
"Of course, Mr. president," Letta says, trying to calm him and focus once again on the garbage issue. "Now let's decide the next move. The country expects a concrete proposal..."
"I agree" Prestigiacomo says. "But we must not overlook the issue of the National Park of Vesuvius, that is a protected area ..."
"And what about Agcom?!" Silvio cries again. "The TG1 and TG4 are in favor of the government. What’s new?! I do not understand. Innocenzi is no more with them, they have Martusciello, now, not Vendola…"
"Hem", Letta interrupts him, interpreting the common thought. "Excuse me, President, but you was speaking of a drastic solution…"
"What?"
"The rubbish problem…" Caldoro says.
"The garbage in Campania…" Bertolaso adds.
"Oh, yes…" Silvio distracted obeserves. "As I said, we need a drastic solution, the usual one…"
"What?" Tremonti asks, after an interminable pause.
"The usual," Silvio annoyed says. "the economic incentives..."
Tremonti is going to argue but Berlusconi anticipates him: "Don’t worry, I pay…"
"And who we give this money to?" Caldoro asks. "To the people of Naples province?"
"To the people…" Silvio corrects. "What an exaggeration."
"And who?" Prestigiacomo candidly asks.
Silvio ignores her again and gets up to leave, but before leaving he says to Letta: "Ah, look, some of us have to claim that behind the protesters is not the mafia, but… those… who we always say? What are they called?
"Anarcho-insurgents," Letta answers.
"Exactly, those ones. And make disappear from the TV news the word Camorra. The war is over. "
Go in peace… 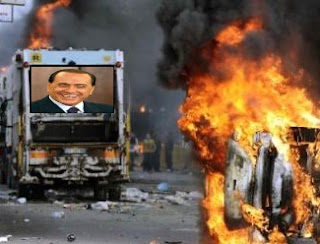 The News: Today Berlusconi government will discuss the "war" of Terzigno against the opening of two rubbish landfills.
Stories and news: “invented” Stories, fruit of my imagination, inspired by “true” media News.