October 08, 2010
Stories and News No. 244
I recently read that the 2010 Nobel Peace Prize was awarded to Chinese dissident writer Liu Xiaobo. The latter is a long time engaged man in the struggle for human rights in China. Not an easy choice, which led him on December 8 2008 to be imprisoned for having joined the movement Charter 08, which later I will speak of. After being secretly held in jail, his official arrest has been reported only on June 23 during the following year with the formal charges of inciting subversion of state power.
The trial was in December 23 2009 and after two days he was sentenced to 11 years in prison and two years of disqualification from public office. The appeal trial on February confirmed the ruling.
The aspect that has aroused my curiosity is mostly about the Charter 08, the subject of the alleged scandal that, among other things, caused the repressive reaction by the Chinese authorities.
I read it is a manifesto whose signature was made on 10 December 2008, at the anniversary of the Universal Declaration of Human Rights.
Then it was spread over the web from more than 300 Chinese intellectuals, active in the protection of human rights, getting further adhesions by 8000 people.
One of the promoters and coordinators of this initiative is the writer Liu Xiaobo.
Apparently, this manifesto can be summarized in 19 demands or reforms considered by the designers indispensable to finally make China a democratic country.
Now some of you will ask: but what is the relation with Berlusconi?
Here's the answer…
The Story:
Once upon a time there were 19 demands aimed to give greater democracy to their nation:
1. Amending the Constitution.
2. Separation of powers.
3. Legislative democracy.
4. An independent judiciary.
5. Public control of public servants.
6. Guarantee of human rights.
7. Election of public officials.
8. Rural–urban equality.
9. Freedom of association.
10. Freedom of assembly.
11. Freedom of expression.
12. Freedom of religion.
13. Civic education.
14. Protection of private property.
15. Financial and tax reform.
16. Social security.
17. Protection of the environment.
18. A federated republic.
19. Truth in reconciliation.
Well, if you have arrived here, I assume you will agree with me that Berluscon’s Italy – and not only Italy… has much to do with it. 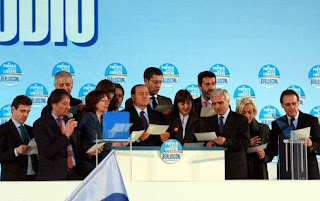 PS: Maybe we all should make a manifesto like that…
The News: Nobel Peace Prize to Chinese dissident Liu Xiaobo.
Stories and news: “invented” Stories, fruit of my imagination, inspired by “true” media News.