Paul the Octpus dead: powers to Deborah the female mice

October 26, 2010
Stories and News No. 256
I just learned about the death of Paul the octopus.
Now, I understand that sometimes I can be cynical and I take this opportunity to apologize if sometimes I offended the feelings of someone.
However, dear animalists, forgive me, but seeing all the attention the media give to Paul’s end - with all the daily human tragedies, I can not avoid to write something irreverent.
Irreverent…
Mine is a real journalistic scoop.
Some of my sources told me that the German octopus, before exhaling his last water breath, have transferred its powers to another creature, chosen as a worthy heir of his divination.
It is a female mice, long ago emigrated to Germany in search of fortune and in particular a better tomorrow.
Its origins are unclear and the man who discovered it - the cleaner of the aquarium where Paul lived, has named Deborah, in memory of his grandmother recently passed away.
Deborah, unlike the octopus, is not fond of football
She – I like to speak of her as a lady, is interested in politics, which makes her predictions even more interesting.
So, luckily, I managed to make the first official interview to this extraordinary animal:
The Story:
Blog: Miss Deborah the female mice, can I call you just Deborah?
Deborah: Sure, better without the female mice…
Blog: Yes, I'm sorry… can you talk about your new powers?
Deborah: What can I say? Here everything has changed. Before I was only an immigrant mouse, who took away jobs from local rats and now…
Blog: Now?
Deborah: Now I am a star. Newspapers, television, and also a movie.
Blog: A movie? Can you tell us anything?
Deborah: My agent advised me not to say more.
Blog: Agent? Do you already have an agent?
Deborah: Yes, the cleaner that found me.
Blog: Listen, let’s back to your new capacity, I knew that your predictions are about politics. Do you confirm?
Deborah: Yeah. Let’s go the point: what do you want to know?
Blog: Who will win the midterm elections in the United States on November 2?
Deborah: The Republicans.
Blog: Are you sure?
Deborah: Yes I do. Although there is no need to guess a female mice to understand it.
Blog: Why?
Deborah: Because Obama has not scheduled any war. USA have left Iraq and are about to end Afghanistan missions. This is a problem, since the United States and its allies always need a great war somewhere in the world. And you know, the U.S. Republicans start every great war.
Blog: Wow, you make it easy…
Deborah: Do not exagerate, I have the powers of the octopus, but I still have the brain of a mouse.
Blog: I see. Look, on Italy, what will happen in the near future to Berlusconi and his government?
Deborah: Gianfranco Fini will be the leader of the center-right and the new prime minister.
Blog: What about Berlusconi?
Deborah: He will be President of the Republic.
Blog: Really?
Deborah: Sure. But this does not take a magic mouse to know too. Silvio is interested in the high offices as me every kind of cheese…
Blog: You know, I do not like the future scene you describe…
Deborah: This is the biggest dilemma of life, as Paul telepathically told me before sending its powers: you can make your choices basing them on the advice of an animal or…
Blog: Or?
Deborah: Or turn up the ass and try to change the outcome of the game. 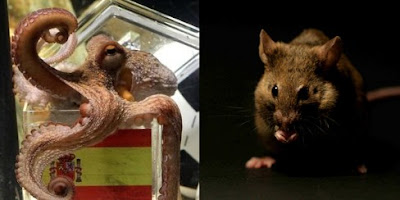