October 13, 2010
Stories and News No. 247
I just read that the RAI TV journalist Michele Santoro has been suspended for ten days and without salary for the same period from 18 October.
Apparently, the so-called disciplinary action was decided by the General Director of RAI Mauro Masi, as a result of the insult directed by Santoro to him - if I correctly remember, in the first episode of Anno Zero talk show: "Fuc… your glass!"
Yes, that is not a mistake, he said glass.
Masi immediately wanted to clear that there is no question of censorship: "The disciplinary action can not be considered in any way attributable to publishing initiatives aimed at restricting the freedom of expression or the right to criticize. Santoro has been guilty of disciplinary violations in two very specific ways: the use of television for personal interest and offensive direct attack on the General Director…"
That's him.
Now, I have a vice.
When I hear someone who talks about himself in third person I seriously begin to doubt his mental faculties.
However, I must admit that I agree with Masi on one point: the suspension of Santoro has nothing to do with censorship and freedom of expression.
The focal point, the casus belli, the mother of all evils, is there where the sun does not arrive: the glass…
The Story:
Once upon a time there was a man who can be called Mauro.
A random name.
Mauro graduated in Law with honors, but immediately showed a great interest in the economy.
Especially for his glass, as you will see later.
The following years he attended at the Bocconi University a course on "Management and control of banking" and even a master in Washington, "Technical and Economic Analysis" at the IMF Institute.
However, he did not stop thinking about how to warm his glass.
In 1978 he finally began to get the first great achievement in this sense: he entered into the Bank of Italy, becoming also manager.
Eh, if a manager has not a warm glass, you tell me who is.
A politician?
That is true, I agree.
In fact, Mauro was consistent and in 1988 began to cooperate with the Presidency of the Council of Ministers as adviser to the business community and then as director of the press.
By that time he definitely succeded to bring his glass on the so-called upper floors.
Since that period, the goal was to maintain it there and Mauro proved to be versatile in moving his glass from a chair to another, thanks to the encounter with a guy who changed his career for ever.
I am talking about a great fan of glasses, a true collector.
As long as he needs, obviously, because when he does not see their utility anymore he breaks them with no regrets.
So, Mauro, thanks to the latter, over the years became a member of the Policy Committee of Informatics and Telecommunications, Head of Department for Information and Publishing of the Presidency of the Council of Ministers, vice chairman of the Committee for a code self-regulation on TV and children, Secretary General of the Presidency of the Council of Ministers and Head of the Office of the Deputy Prime Ministers in two terms of office by the collector of glasses above.
The rest is history.
In 2009, Mauro was appointed general manager of the public television in a strange country, recently listed as 74th in the world and last in Europe in the gender gap ranking.
Besides, since 2010 he is director of two other so-called State channels.
As if to say, we are dealing with a big glass, here.
You know, we are talking about the general manager of a public television where, since immemorial time, are working thousands of people who have given more than their glass to get this privilege.
Now let’s go to the fact: in a clearly critical of this situation and particularly of our protagonist talk show, the host has expressed his opposition to Mauro sending him these words: "Fuc… your glass!"
In response, Mauro has suspended the host for ten days.
Sorry, but what do you expect from someone who considers his own glass as the most important thing? 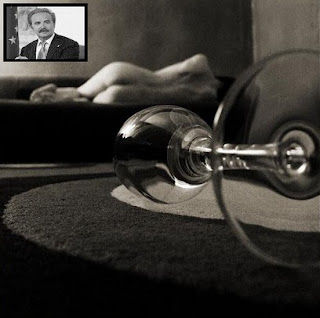