Rai director Masi is servant for satirist Vauro: where is insult?

October 14, 2010
Stories and News No. 248
I just learned that the Rai General Director Mauro Masi - which inspired the character jealous of his glass yesterday I wrote about, has asked his lawyers to sue The Manifesto, a traditionally Left Newspaper.
The object of the scandal would apparently be a satirical cartoon by Vauro, depicting the Masi practically camouflaged as Ivan Bogdanov, referred to be leader of the Serbian mob, which prevented the last soccer game of Italia national team.
The text of the cartoon is divided in two parts: The Serbian ultras who made suspend the game at Marassi Stadium was arrested and Wanted the ultras servant who made suspend Annozero Rai (The director Masi has ordered the suspension of Annozero’s host, Michele Santoro).
Now, trust me, I did not see where the offense is.
On the glass, I saw the logic.
Let's be honest: we all love our glasses and those who deny consciously lie.
But in this case, I can not understand why Rai director is so much angry to sue.
I re-read several times the text of the offending cartoon, and I came to this conclusion: the Director General of RAI felt insulted by the word servant.
Why?
The Story:
Once upon a time there was the Director General of the Italian Radio and Television, in short Rai.
Let’s avoid problems: he was not called Mauro Masi.
This story applies to everyone, I hope also the next will understand.
Rai was the exclusive concession society of public service broadcasting in Italy. As State radio and television, RAI had legal obligations to produce consistent service and public utility broadcasting in a fixed hourly rate.
You'll wonder: what does public service mean?
The notion of public service broadcasting was adopted for the first time by the BBC television as a common value of national importance.
The public service, as governed by a license fee, must ensure that the services of its general networks are completely public, and can be viewed by the widest number of people.
The public service must also aim to cultivate the quality of its audience.
So, since Rai was the exclusive licensee of the public service, you all clearly see that its employees had been hired to serve the audience.
In other words, the employees of the Italian Radio and Television were servants of the audience.
Then, the RAI General Director was or should have been the greatest servant of the audience, that is the people of viewers.
This is the way how Giovanni Falcone defined the heroic officers attacked and killed by mafia: State servants.
It’s a great honor, in my opinion, to have the responsibility of doing something good for your fellow citizens.
The problem, in my opinion, is not in the word servant.
The focal point, that can transform a hero in his opposite, is who he is actually serving… 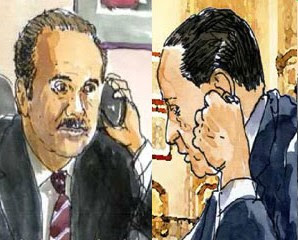 The News: Masi lawsuit for a cartoon ny Vauro.