October 25, 2010
Stories and News No. 255
It was inevitable that sooner or later, among the huge number of documents on the Iraq war recently published by Wikileaks, some revelation on Italy emerged.
Today two news belie the Italian army and the Government releases on the facts.
According to the former, at the beginning of August 2004 Italian soldiers blew an ambulance, killing four people, including a pregnant woman.
That contradicts the official report, which speaks of a generic car that did not stop at the check point, also responding to the fire.
However, the second news particularly affects my attention.
For Julian Assange’s website, the Italian soldier Salvatore Marracino did not shot himself because of his weapon jam.
He was killed.
In 'warglish', he has been accidentally shot by friendly fire…
The Story:
Friendly fire, so they call me.
Yes, you perfectly understood.
I am not an oxymoron, as some insinuate.
If so, then what about humanitarian war, preventive invasion or smart bombs?
I burn, therefore I exist.
I am merely not a matter of language.
Moreover, I have no intention of making fun with words.
I am a murderer.
I am a murderer because I killed and I still do.
That is simple and no doubtful, at least in my opinion.
I started to claim victims long ago and, you may believe it or not, I still have a clean criminal record.
In 1801, during the Battle of Algeciras, I used the darkness of night and cunning of the British to confuse two Spanish ships, killing about 1700 sailors.
Anyway, this is nothing.
Think that only in the First World War, France estimated that at least 75,000 soldiers have died by my hand.
In the Second world war, I started my job just five days after the start of the latter, when two British airmen mistook two American planes for Germans, causing the death of one of the pilots.
Needless to say that the two airmen were acquitted.
In the Vietnam War I have killed at least eight thousand times.
Someone have also made a film.
I see that you like me because time passed and you requested more and more my performance.
During the first Gulf War, I cut off the lives of at least 148 U.S. soldiers, but this has not deterred their governments to send more to Afghanistan.
What a great working there.
And I can not avoid to quote what you called the Tarnak farm incident.
I remember it how my four Canadian soldiers murder, but of course it depends on the point of view.
For me they are two: the victim and the assassin, that would be me.
However, I now understand that for you things are not so simple.
As some of you, I knew of the Italian soldier by Wikileaks.
What can I say?
You may choose what truth you prefer.
One thing is certain: it is not the first, and if things continues to work so, it will not be my last murder… 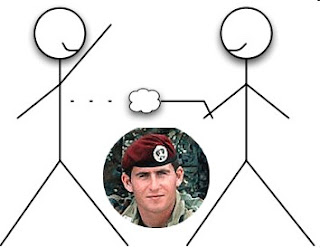