Today, two news particularly caught my attention.
The former is the imminent publication by Wikileaks of about 400,000 secret documents on the Iraq war.
At the time of writing this post, the site is 'currently under scheduled maintenance', waiting to give the people of the world wide web its hottest files.
Meanwhile, these people are practically clogging it of visits, despite U.S. government has prepared a task force to respond.
Wikileaks also informed that the U.S. authorities have directly contributed to the blocking of donations on the site.
Nevertheless, this represents an extraordinary marketing campaign for them, don’t you agree?
The latter news regards Silvio Berlusconi.
I refer to the last episode of Report, an indipendend Italian journalistic TV program, which recently accused Berlusconi of having illegally bought some villas in the islands of Antigua.
Thanks to anticipations in many media and particularly on the brilliant threats by Niccolò Ghedini, Berlusconi’s lawyer, the TV show got audience record.
Hence the dilemma: in the web time, government’s censorship is a hindrance or help?

If I told you to own the next exclusive secret file about the Iraq war that Wikileaks is about to publish? Imagine a telegram sent in 2008 by U.S. President George W. Bush to Italy Prime Minister Silvio Berlusconi: 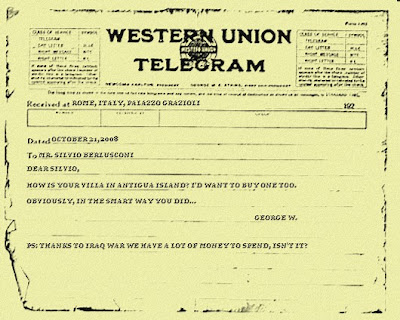 Obviously, it is a fake.
However, how many would consider it likely?