Brescia immigrants protest on the crane is our story

November 12, 2010
Stories and News No. 268
I think what happened yesterday during the TV talk show Anno Zero (Year Zero) is the exact picture of the shameful way how my country is dealing with the human beings that, in this difficult moment in our history, are significantly contributing to the welfare.
This is the reality of the overwhelming majority of the immigrants who live and work beside us, most of the time for us.
The fact is that, as happened yesterday, on immigration themes, in front of people who I do not consider as racists, not even ignorant, but just dangerously devoid of an acceptable number of neurons, everybody is good with words.
Take as example the speech by former Berlusconi’s ally Gianfranco Fini, where in contrast to his intolerant ghost – now properly buried in the past - said of being a supporter of equality between whites and blacks and respect for foreigners.
If also Fini became a friend of immigrants with words, let alone who is flying that flag since some time, as the traditionally tolerant Left and the virtuously welcoming Catholic Center.
However, when the reality strongly entered the television - the protest of four men (two declined) who from October 30 are on a crane in Brescia to ask citizenship permission, we have witnessed a faithful representation of the hypocrisy in front of immigrants suffering.
There was the modern Right champion of human rights of Italo Bocchino.
There was the Christian heart full of love for the last ones of Pier Ferdinando Casini.
And there was the new generation of Democratic Party, the Florence Mayor Matteo Renzi.
However, none of the three spent a word to really be with those four.
Apart from Michele Santoro and Anno Zero editorial staff that has had the merit to give light to this fact, only reporter Luca Telese - who I give my sincere applause to, has shown what to understand the abuses that many, too many of our fellow citizens suffer every day means.
Some of you, as the pious Casini, will argue that the problem is the protest, pretending to have the citizenship permit.
These are bullshits.
Let's face it: defending foreigners nothing is gained, isn’t it?
Do not tell me that it happens because the Italian country is Right.
This is bullshit too and you know better than me.
Even here, on this Blog, I have confirms every day.
If I write a good post against Berlusconi visits and supportive comments arrive a lot, from Left, Center and more recently from the restyled Right.
However, every time I have dedicated this space to the immigrants, the desert many of them come from is the best word to describe what I received in return…
The (our) Story:
The story of four men on the crane is our story.
It is the story of many people here.
Persons who wake up in the morning, knowing that nothing more than fatigue and frustration they will get from the day they are going to live.
Yet, like many of us, they get out of bed, wash their face, get dressed and leave home to earn some money.
They know they should not expect anything good from people they will meet.
They understood it is the best way to endure the pain of disappointment and yet live fully the joy of surprise.
When it arrives…
As a call from a friend that between the chat remembers to ask how are you.
As an unexpected hug from your son to remember you the value of spontaneity.
As even the solidarity smile of a stranger on the subway train, proving understand your disappointment in front of the umpteenth rude that steals your seat.
However, when days like this become weeks, months, years, something starts to grow inside, until it is too big to be ignored.
Like a crushed, crushed and again crushed human right.
Like an abused, abused and increasingly abused life.
Like a violated in its more fragile feelings country.
And suddenly, one of us gets up in an apparently different from the previous morning and said the most right word he could never find at the moment: enough!
Here, that's where a new story begins, the story of people who - as Martin Luther King and Gandhi did before, has finally managed to lift their head and demand respect.
This is not only our story.
It must be.
Here and now. 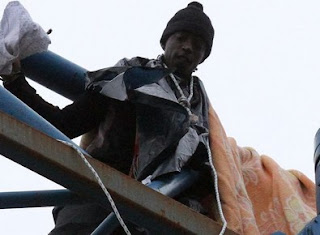 The News: The video of police charge to the presidium protesting for immigrants in Brescia.
Stories and news: “invented” Stories, fruit of my imagination, inspired by “true” media News.