November 09, 2010
Stories and News No. 265
Yesterday on Italian TV a new show debuted: Vieni via con me (Come away with me), designed and conducted by Fabio Fazio and Roberto Saviano.
I am not surprised by the audience record.
As I wrote in the past, when you attract a lot of attention from major media, having such stars, in addition the valuable participation of Roberto Benigni, in my humble opinion you have a certain victory.
Overall I liked the show.
Especially when Saviano said something obvious, even though you listen to the majority of the government and some opposition politicians too, it seems it is not at all: the government fell.
I challenge anyone to prove otherwise.
Only in a country where the government has fallen the facts that we read everyday in the news may happen.
Returning to the yesterday TV show, I appreciated the idea of the list with the many way people call the homosexuals.
I like to propose my own, about persons discriminated as homosexuals are: the strangers.
To make it more original, I added the styles which the general speaker would use to name the alien citizen…
The Story:
Clear and direct: "Dear sir, a single headword describes your entire literature: nigger."
Gastronomic: "A chocolate, that’s the tasty chew the sight of you calls to mind."
Modern: "Ignoring all origins or destinations of whatsoever navigation you have undertaken, you shall be nothing more than non-EU immigrant in my overcrowded memory."
Prescriptive: "Illegal immigrant, as much as you might enjoy the taste of hospitality, it will suffice to forget an authenticated piece of paper for you to be illegal anew."
Warmonger: "Come on, let that beard grow, loosen your naturally curly hair, give yourself a piece of clothing free of the mirror and I too will have my Taliban to kill."
Generalizing: "Where are you from? No, don’t tell me, let me look at you, it only takes me a minute, I have the article in mind, it doesn’t matter if I’m wrong, you are, most of the time Moroccan."
Polite: "I’ve nothing against people like you, colored, as long as you behave properly, insofar as you are able to."
Exaggerated: "It’s useless to hide it by emphasizing the local dialect, wearing a familiar tee-shirt, smoothing down your hair. You are, inevitably, African.”
Chromatic: "Believe me, it’s a question of practicality. Brown is, in effect, is more exact but alas I haven’t got time to waste with a black like you."
Knowledgeable: "The issue of an incestuous coupling, the father exotic and the mother a local lass taken by trickery, is called mulatto.”
Indifferent: "The premises being unvaried and the factors inverted, there can be no other definition than half-breed."
Confused: "Do you now comprehend my intolerance if you turn out to be Creole as well?"
Patriotic: "You do not wish to take flight and bravely hit the precious sphere? You refuse to slip catlike through the enemy lines with that very sphere glued to your feet? And though you consent to your role for years, you dare change jersey and spit in the plate that has so kindly nourished you? You shall not pass that line, foreigner, you shall no longer pass the goal- line.”
Punitive: "How many mistakes must we have made to deserve you, oh lump of coal, at every red light that stops us?"
Civilized: "Nature betrays you, savage, it sets you apart from those who have chosen the laws, rights and duties which make us deserve peace and prosperity while you are left with envy."
Finally political: "Work force? Menials for organized crime? Upturn in the birthrate? Dear stranger, you have the obligation to find employment." 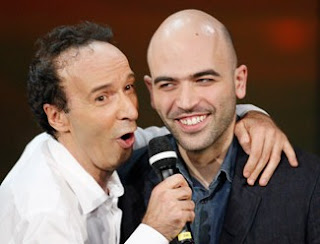 The News: Saviano, Fazio and Benigni on Raitre debut.
Stories and news: “invented” Stories, fruit of my imagination, inspired by “true” media News.