November 03, 2010
Stories and News No. 261
I read this morning that two more members have left Berlusconi and PDL to join Futuro e Libertà (Future and Freedom, FLI), the new Gianfranco Fini’s Party.
Before today I did not know who they were but now I know something more: two more votes for Fini and same less for Silvio.
I was tempted to write another post, this afternoon, in this case in defense of Minister Renato Brunetta.
Let’s forget about the Italian premier, but how can you insinuate that this charming and sexy man might pay money to go with a woman?
It would have been too obvious.
This escape from Italy Prime Minister’s team to his former ally group intrigues me more.
These events evoke a single vision in my twisted imagination.
I close my eyes and let my fingers individually tampering keys…
The Story:
I see the open sea.
Out in the open sea there is a ship.
The ship is sinking.
Well, I assume that when it is upright, its bow is pointing toward the sky instead of the horizon and the stern is submerged in water up to half of the craft, it means that the ship is sinking.
If someone insists to convince you otherwise, he is an incurable optimist or Tg1’s director Augusto Minzolini.
Next to the ship there is a lifeboat.
On the lifeboat there are 37 survivors.
Two have been added recently.
As leader of the fugitives, at the helm of the boat, there is a tall, thin man with glasses.
Those who persist in remaining on the ship did everything they could to discredit him.
It did not work.
Anyway, if the ship sinks what is the logic attacking who is saving his ass?
On the sinking ship there is most of the crew.
They are all gathered around the captain.
He is an old captain, who despite the terrible situation continues to smile and to minimize everything.
Some bad voices also insinuate he is gay, but that is just rubbish, they most faithful sailors say.
Meanwhile the ship continues to go down, deeper and deeper, further down.
While the lifeboat is now packed and about to sail the old man climbs up the highest point of the bow.
The fact is that he cannot swim, although he always told the opposite.
This is not his only crap, but that's another story.
With him there are three sailors: Gasparri, Bondi and Capezzone.
When the water starts to brush his feet, the first says: “Oh, it’s not cold, though. We can bath…"
Then he jumps into the sea, to join the mutineers.
The second says: "Hum… two hours past the lunch, a little dip cannot hurt…"
So he reaches the lifeboat.
And the ship sinks, along with the old captain.
Yes? What happened to the third?
Oh, I’m sorry, what a careless.
He was not a person but a particularly curious tuna.
The third sailor has disappeared much earlier, lifeboat or not.
He knew that there is always another ship and another captain to have a good time with.
Moreover, how do you think his former crew was formed? 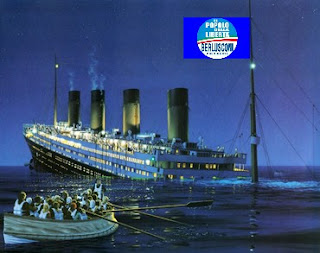 The News: Exodus from the PDL, two other deputies choose Fini.
Stories and news: “invented” Stories, fruit of my imagination, inspired by “true” media News.