November 05, 2010
Stories and News No. 263
I read this morning that the Italian Council of Ministers approved the new security laws package developed by Minister Roberto Maroni.
The innovative key points regard forced expulsion of illegal EU citizens, the agency for nuclear and particularly the introduction of stricter rules against street prostitution.
I am convinced that a Right voter will surely approve such action, typical of a country governed by a conservative coalition, traditionally rigid and uncompromising dealing with issues such as legality and safety.
The problem or farce is that all this should be compared to today Italian reality.
Legality and safety must be a value for all.
Otherwise, a phone call comes from above and every law goes to hell.
So here is the real security laws, tailored to today's situation...
The Story:
The highlights of the security laws 2010, with annotations ignored by our media:
About the forced expulsion of illegal EU citizens:
Minister Maroni: "The European directive on free movement requires that the foreigner can not live more than three months in a country if he has no income, employment and adequate home, but there is no sanction for those not in good standing. It is currently planned to stop the EU citizen who does not comply with an order to leave by the quaestor on imperative reasons of public safety, but it is an ineffective penalty that never runs. We aim instead to expel from Italy who fails to comply within 30 days of the order of the quaestor.
Note: If the EU citizen is a female, attractive and provocative look girl, first consult Lele Mora.
About Agency for Nuclear:
The Council of Ministers decided the names of members of the Board of the Agency for Nuclear Safety. The presidency, as indicated by the Presidency of the Council of Ministers, will be Umberto Veronesi. The other components are Maurizio Cumo and Marco Enrico Ricotti, indicated by the Minister of Economic Development Paolo Romani, and Michele Corradino and Stefano Dambruoso, indicated by the Environment Minister Stefania Prestigiacomo.
Note: Other names will get the rich eternal contracts to build the alleged nuclear plants, but you'll never know who will indicate them.
About safety streets:
At the center there is a crackdown against prostitution: forced expulsion of prostitutes working on the streets. The goal is to return the prostitutes who do not comply to the expulsion order.
Note: To all agents in the area, before taking any action, contact the Prime Minister Security guards, in case you get one of the many of Mubarak’s granddaughters. 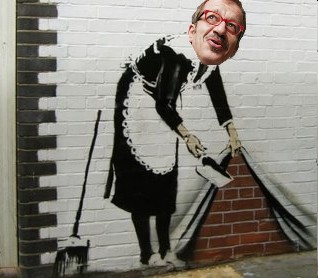 The News: Green light by the Council of Ministers to the security package laws.
Stories and news: “invented” Stories, fruit of my imagination, inspired by “true” media News.