Mario Monicelli story with his films

November 30, 2010
Stories and News No. 280
Italian Movie Director Mario Monicelli died.
The first thing I did this morning is going to read what I wrote in July about his last speech on Italy TV.
If you have time, check it out and then read what the newspapers say today.
Above all, reviewing the video caused me great sadness and a bit of anger.
So, wanting to retrace his life, I once again read his biography on Wikipedia.
I searched the web for answers about his gesture, but then I read the words of his grandson, Niccolò Monicelli: "It is not a tragic end; he is a man who lived. It seems to me that he has left so many messages: remember him with his films. "
I immediately liked the idea.
I took his entire filmography and I thought the best thing I could do was to remember him with this…
The Story:
Once upon a time there was a Maestro named Mario.
Mario was born in 1915 in Viareggio, Italy.
So, Mario was Italian.
Forgive the redundancy, but in these days I feel huge pleasure knowing that a man like him was my countryman.
Mario was an artist, a great artist.
However, even before an artist, he was a great man.
Why?
It was enough to hear him speak, as it happened to me on December 5 2009 in Rome.
To recognize the great men, you just have to listen them, paying attention to their words.
The same happens with the little ones.
With the latter is more difficult, because – being little – they are forced to cry and especially to talk more.
However, Mario was and will forever be a great person also for many other reasons, as many as his works are.
Mario was great because when he created he was thinking of how to give his best, fuck the celebrities (Al diavolo la celebrità).
Mario was great because he loved to tell all he saw, no distinction between cops and thieves (Guardie e ladri) or fathers and sons (Padri e figli).
Mario was great because he was a hero of our times (Un eroe dei nostri tempi), whatever they are.
Mario was great because he did not chase the trendy characters but he gave priority to the usual unknown (I soliti ignoti).
Mario was great because he lived his art as a challenge to be faced with courage, as the great war (La grande guerra) to be tackled head on.
Mario was great because unlike today's crap, it always got laughs of joy, real joy.
Mario was great because with his stories he was able to transform a country from L'armata Brancaleone to a land to be proud of.
Mario was great because if you really had heard him, you would have wanted to say "He's one of my friends (Amici miei)..."
Mario was great because unlike most of his today colleagues, he was not little, little burgess (Un borghese piccolo piccolo), far from it.
Mario was great because he always knew how to show the people the old and the new monsters (I nuovi mostri).
Mario was great because, if the latter had protested, he would have answered as Il Marchese del Grillo: “Mi dispiace, ma io so' io e voi non siete un cazzo! (I'm sorry, but I am me and you're nothing!)”
Mario was great because remembering his stories we can and must believe that another world is possible (Un altro mondo è possibile).
Mario was great because he worked until his last days, to prove that the miracles are possible, such as desert roses (Le rose del deserto).
Mario was a great man and now he is gone.
Maybe that is one more reason to take care of the remained ones and especially to free use of the little ones… 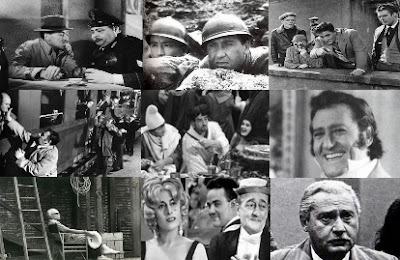