November 16, 2010
Stories and News No. 270
Last night, Fabio Fazio and Roberto Saviano scored another remarkable result in audience share with Vieni via con me (Come away with me) talk show.
In my humble opinion, if in the first episode the magnet for the public has been produced by Roberto Benigni, in the second, former Berlusconi’s ally Gianfranco Fini and Democratic Party leaders Pierluigi Bersani couple was definitely the trump card.
That was not surprisingly, because in the days before the event, this unusual common TV presence has aroused the predictable protests by the PDL and Mediaset… oops, Rai Direction.
As the precedent, even the next day they talk about the absence of contradiction, which in the 'Berluscones' vocabulary means: interrupting the others all the time, especially when they said sensible things, creating confusion and inability understanding to the audience.
Specifically, Fini and Bersani read a list of the respective values of Right and Left.
Giving a quick look on Italian web I have to say I was quite surprised to find wide acceptance of this initiative, which I disagree strongly with.
We are all good at reading a list of words.
But as a citizen what I ask to who represents me is not to know the values of the political party which he belongs to, but to put them into practice every day; from start to finish of his career, with consistency and honesty.
In that case, he has no need to read that list.
His actions speak for him.
That's why neither Fini nor Bersani have so far shown enough authoritative to talk about their alleged values.
Closed this long introduction, let's get to the point of the post, which then is connected to the above statements.
It seems that Roberto Maroni, Minister of the Interior and (by the way, a question to his ministry: why so many visits by you in my Italian Blog?) Northern League member has not liked the monologue by Saviano on the relationship between the Mafia and Northern League.
So he has requested to RAI the opportunity to respond.
Minister, what RAI!
This space is available.
Indeed, I ease the task.
You, Padani, have the right to listen your values list…
The Story:
The values of the Northern League
Europe, hands down by the children! The Northern League for the 2nd time, stop the Council of Europe in the attempt of the Communists to approve the adoption of children by homosexual couples: Stop! Rossi Nazis! (2000).
Stop Immigration! Our land is not for sale (2001).
Minimum pensions: 1,000,000 lire per month. Promise kept (2001).
Prostitution and pornography Stop! (2002).
No to terrorism. Call to fight for the freedom of Padania (2002).
No more Rome owner. Power to North (2003)
No vote to immigrants (2003).
Before the Chinese, now the Turks: Small and Medium Business are at risk (2004).
Padania vs thieving Rome (2004).
No to Turkey in Europe, yes to the Christian roots (2004).
The Federal Reform of the State was approved (2004).
Federalism = we are masters in our house (2005).
Hands off the family, no to same-sex marriages (2006).
No invasion of Chinese goods (2006).
Stop taxes, stop Rome (2007).
Defend your future, off illegal immigrants (2008).
We stopped the invasion (2009).
Thieving Rome, the League North will not forgive (2010).
Perhaps someone might object that these are slogans, not values.
Well, if he will also explain what values inspire them, I'll be ready to listen.
Because what I see behind is all except values… 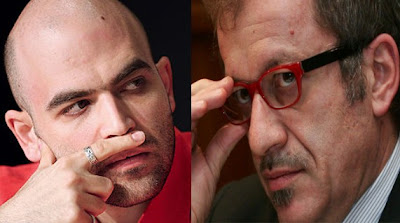 The News: Saviano spoke of relations between Mafia and the Northern League: Minister Maroni was outraged and asked to respond.
Stories and news: “invented” Stories, fruit of my imagination, inspired by “true” media News.