Top Italian Mafia Boss arrested: why is he laughing?

November 18, 2010
Stories and News No. 272
I learned of the arrest of what Italian media have called 'the leader of the Casalesi Clan', Antonio Iovine.
Reading on wikipedia, I discover that he is one of the bosses of the Casalesi Clan, fugitive since 14 years.
In addition, in 2008 he received a life sentence at the end of the appeal process at the Spartacus trial.
Of course, one thing is to say of having arrested one of the bosses and quite another screaming out loud that you have captured the leader of the Casalesi.
The thing that amazed me is the coincidence of this hard thrust to the head of the Camorra, with the recent clash between Italian Interior Minister Roberto Maroni and writer Roberto Saviano.
You know, Italy is the land of coincidences.
Without making reckless allegations, hearing the words of the Minister - We are the mafia of the facts - it is clear that this success carries two messages:
First, if we are the mafia of the facts, the others are those of words (or chat).
Second, we stop the mafia leaders where they live: in the South of Italy.
As if to say, an incredibly favorable coincidence, I believe that also Maroni will agree.
You know, if a man is fugitive since 14 years, how can you predict if and when you will successfully stop him?
However, the detail that even more than the chance of arrest raises my doubts is the expression of the face in Iovine at the time of capture…
The Story:
Here's the land of coincidences.
In the land of coincidences, everything happens by chance.
By chance Forza Italy took vows of DC in Sicily.
It is just a coincidence that on Dec. 14, the day when confidence in the Berlusconi government will be voted, the Constitutional Court will rule on Italian Premier’s future too.
And it is yet an indisputable case that the new chairman of Consob - an independent, administrative authority, with legal personality and autonomy in the activities that protect investors, efficiency, transparency and Development of the Italian stock market - is Giuseppe Vegas, a member of the People of Freedom and confidant of Berlusconi.
In the land of coincidences there is no cause and effect.
No hidden truth, no second order, no pretense.
Everything is what you see and what you see follows only the rule of the case.
So it happens that a man hiding from police since 14 years, with a life sentence on his head, was arrested.
And what does he do? 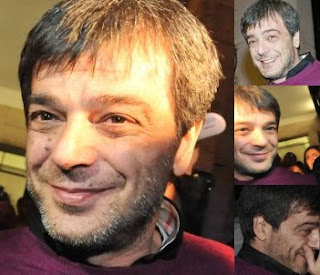 He laughs.
And he laughs.
Not once.
He keeps this merry expression all the way from the house to the car that will bring him to the police station and then into the cell.
If I were in another country, there would be many explanations and most of them extremely disturbing.
Luckily I live here.
The News: Iovine, the head of the Casalesi, arrested.
Stories and news: “invented” Stories, fruit of my imagination, inspired by “true” media News.